It was the site of an infamous cavalry charge that was either an act of supreme bravery or one of sheer stupidity, or both. It inspired a famous poem that is still drilled into schoolchildren. A young woman in London, Florence Nightingale, was so moved upon reading the reports of the wounded that she journeyed to Crimea to set up a pioneer nursing service at the Front.

Balaklava has passed into that odd place in our cultural memory that holds truth and fiction in equal measure. When we think of it at all, we likely think first of Tennyson, second of Florence Nightingale, and, perhaps, after that the details of the battle itself. Like other famous places of conflict  – Troy, Hastings, Waterloo, Gettysburg, Ypres, Bastogne –  it conjures a mixture of history and myth. And we owe much of what we know of the tragic Charge of the Light Brigade to a young Irishman, William Howard Russell, who reported the carnage.

Russell was born in 1820 in Tallaght at Lilyvale, Jobstown, Co. Dublin. He studied at Trinity College. In 1841 he covered the Irish elections for the Times in London. He regularly reported on Irish politics, on Daniel O’Connell and on the Irish Famine. As a reporter for the Times he gained a reputation as one of its finest. In his time he was one of the world’s most famous war correspondents. With his long dark hair, flowing beard and somewhat shabby suit, he cut a curious figure among the gentlemen of the press. His peers thought he was “a vulgar low Irishman, who sings a good song, drinks anyone’s brandy and water and smokes as many cigars as a Jolly Good Fellow. He is just the sort of chap to get information, particularly out of youngsters.”

Whatever his method, his reports from the Crimean War – perhaps the first war widely reported in the media – were so realistic that they helped change the public’s attitude to the war. John Thaddeus Delane, editor of the Times, urged Russell to “tell the exact truth” in his reporting, and Russell did exactly that, filing stories that highlighted the lack of ambulance care for wounded troops, and the battlefield surgeons’ “humane barbarity”. He coined the term “Thin Red Line”. As well as the Crimean conflict, Russell witnessed the Siege of Lucknow and the US Civil War. 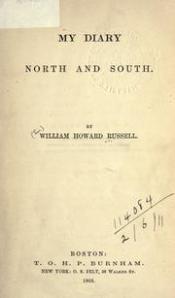 In September, 1854, Dickens and Thackeray entertained the young man with a farewell dinner, and then he set off for the Meidtteranean. On October 25th, 1854, he stood with other spectators above the field at Balaklava, which “was as plainly seen from the verge of the plateau where I stood as the stage and those upon it are seen from the box of the theatre.” His report was issued from the “heights before Sebastopol.” From there he wrote  “a more fearful spectacle was never witnessed than by those who, without the power to aid, beheld their heroic countrymen rushing to the arms of death.”

Russell was moved by the Charge. “If the exhibition of the most brilliant valour, of the excesses of courage, and of a daring which would have reflected lustre on the best days of chivalry can afford full consolation for the disaster of today, we can have no reason to regret the melancholy loss which we sustained in a contest with a savage and barbarian enemy.”

The Crimean War was fought between a loose alliance of Britain, France and Turkey against the Russian Empire’s ambitions. Russia wanted a warm water port in the south–namely, at the Bosporus Straits and the Strait of the Dardanelles, the small waterways connecting the Black Sea to the Aegean and Mediterranean Seas. In 1854, the decaying Ottoman Empire controlled that essential waterway and Russia sought increased power in this region. When the Russians advanced on the Ottomans, Britain and France allied with the Turks and laid siege to the Russians at Sevastapol. The charge at nearby Balaklava was just one event in a siege that lasted a year.

The entire event took less than half and hour. Seldom has a skirmish been witnessed by so many so clearly, or a military blunder so apparent. The foolishness, arrogance and stupidity of the charge is difficult to conceive.

Balaklava, with its scanty shipping, its narrow strip of water, and its old forts … the valley and plain of coarse meadowland, occupied by our cavalry tents … two or two and a half miles across the valley there is an abrupt rocky mountain range of most irregular and picturesque formation, covered with scanty brushwood here and there, or rising into barren pinnacles and plateaus of rock.

He described it as “wonderfully like the Trossachs,” a reference not lost on any of his readers, who would have been raised on Sir Walter Scott’s The Lady of the Lake. 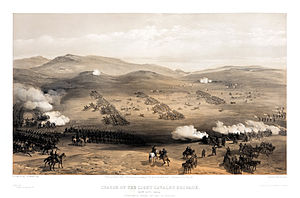 After the Russians had broken through, decimating the Turkish defences, the Turks retreated and formed a line behind the men of the 93rd Highlanders. Two columns formed, one “consists of the Scots Greys and of their old companions in glory, the Enniskilleners; the second of the 4th Royal Irish, of the 5th Dragoon Guards, and of the 1st Royal Dragoons. The Light Cavalry Brigade is on their left in two divisions also.”

Russell’s report may well mark the first time that the phrase “the silence is oppressive” is used. “Between the cannon bursts, one can hear the champing of bits and the clink of sabres in the valley below.” 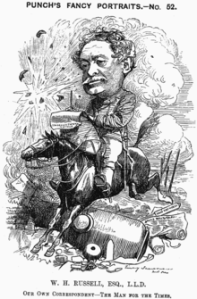 The Russians on their left drew breath for a moment, and then in one grand line dashed at the Highlanders. The ground flies beneath their horses’ feet – gathering speed at every stride they dash on towards that thin red streak of topped with a line of steel…With breathless suspense everyone awaits the bursting of the wave upon the line of Gaelic rock; but ere they came within 150 yards, another deadly volley flashes from the levelled rifles, and carries death and terror into the Russians … they fly back faster than they came.

If that had been the end of it, of course, the skirmish at Balaklava would be scarcely remembered. What followed was viewed by Russell, Lord Raglan and others in utter silence. The Russians advanced again. “The Greys and Enniskilleners went right at the centre of the Russian cavalry. The space between them was only a few hundred yards; it was scarce enough to let the horses gather way, nor had the men quite space sufficient for the full play of their sword arms.” The Russians swallowed them; the Royals and Dragoons came in to charge the other Russian flank. Cheers went up among the spectators.

But then, Russell reported, “now occurred this melancholy catastrophe which fills us all with sorrow.” Brigadier Airey ordered Lord Lucan to advance.

Lord Raglan wishes the cavalry to advance rapidly to the front, follow the enemy & try to prevent the enemy carrying away the guns. Troop Horse Artillery may accompany. French cavalry is on your left. Immediate. R Airey.

The order was taken to Lucan by Captain Louis Nolan, described in terms so glowing you think Russell must have had a crush on him. “A braver soldier than Captain Nolan the army did not possess, a matchless rider and a first-rate swordsman, he held in contempt, I am afraid, even grape and canister.”

It pained Russell to report the order Nolan gave. “God forbid I should cast a shade on the brightness of his honour, but I am bound to state what I am told occurred.” Nolan ordered Lucan and Cardigan to advance, in spite of Lucan’s protests that it was madness to do so. Nolan flung his arm out and said, “there is your enemy, sir.”

Nolan had pointed in the wrong direction. The Russians were lined up on the ridge; what cavalry would ever charge without any infantry support? “Certainly, sir,” said Cardigan, “but allow me to point out that the Russians have a battery in the valley on our front, and batteries and riflemen on both sides.” Lucan replied, “I know it. But Lord Raglan will have it. We have no choice but to obey.” And so, due to an ambiguous order, the Light Brigade charged down the wrong valley – instead of through a parallel valley behind one of the two Russian lines. 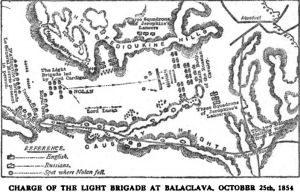 Russell, watching all of this, wrote, “Don Quixote in his tilt against the windmill was not near so rash and reckless as the gallant fellows who prepared without a thought to rush on almost certain death.” Russell counted just over six hundred men, whose “desperate valour knew no bounds, and far indeed was it removed from its so-called better part – discretion.”

The Russians “belched forth, from thirty iron mouths, a flood of smoke and flame, through which hissed the deadly balls. Their flight was marked by instant gaps in our ranks, by dead men and horses, by steeds flying wounded or riderless across the plain.” 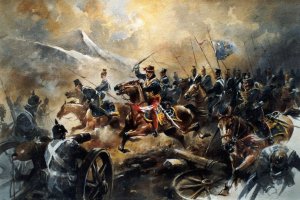 “The plain was strewed with their bodies and with the carcasses of horses. Through the clouds of smoke we could see their sabres flashing as they rode up to the guns and dashed between them.” The blaze of steel was “like the turn of a shoal of mackerel” (this wasn’t Russell’s colourful description, but that of an officer standing nearby.) Russell went on “Wounded men and dismounted troopers flying towards us told the sad tale – demigods could not have done what they had failed to do.”

Then the Russians fired on their own troops as they were mingling and fighting with the British “an act of atrocity without parallel in the modern warfare of civilised nations“ The Russians fired “a murderous volley of grape and canister on the mass of men and horses, mingling friend and foe in one common ruin.”

When John Bright read Russell’s report, he wrote “the Angel of Death has been abroad throughout the land. You may almost hear the beating of its wings.”

The public was outraged at the squander of life and laid the blame squarely at the commanders. The commanders themselves started blaming each other. Raglan blamed Lucan for the charge, claiming that “from some misconception of the order to advance, the Lieutenant-General (Lucan) considered that he was bound to attack at all hazards, and he accordingly ordered Major-General the Earl of Cardigan to move forward with the Light Brigade.”Lucan was furious at being made a scapegoat: Raglan claimed he should have exercised his discretion, but throughout the campaign up to that date Lucan considered Raglan had allowed him no independence at all and required that his orders be followed to the letter. Cardigan, who had merely obeyed orders, blamed Lucan for giving those orders. He returned home a hero and was promoted to Inspector General of the Cavalry.

In the following winter Russell reported on the hardships that the troops endured. “All the pictures ever drawn of plague and pestilence, from the work of the inspired writer who chronicled the woes of infidel Egypt down to the narratives of Boccaccio, Defoe and Moltke, fall short of individual ‘bits’ of disease and death which anyone may see in half a dozen places during an hour’s walk in Balaklava … the sick appear to be tended by the sick and the dying by the dying.”

Russell retired as a correspondent in 1882. He was later awarded the Royal Victorian Order by King Edward VII, who allegedly said to him, “don’t kneel, Billy, just stoop.” Russell died in London in 1907.

5 thoughts on “Diasporational Part Nine: The Irishman who Witnessed The Charge of the Light Brigade”