The stores were marked by a distinctive green storefront and bargain prices. They sold in bulk and were staffed by few clerks – mostly young, mostly Irish fresh off the boat, mostly happy for a job and content with low wages. Profits soared. Soon James Butler was the largest grocery-chain owner in America. In 1909 he owned 200 of them; by the time he retired in lavish style, there were 1100 and he was worth $30 million. 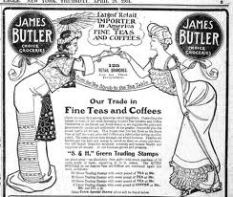 James Butler was born in 1855 on a farm in Russellstown, Co. Kilkenny. In 1875 he emigrated to America, first to Boston, then to Chicago and working as a kitchen boy at the Sherman Hotel. From there he moved to New York and worked at the Windsor Hotel. When Grover Cleveland was inaugurated President, Butler was in charge of his banquet at the hotel. He worked in other hotels in New York before meeting O’Connor and deciding to get into the grocery business.

Though he had built a vast fortune from nothing, he had little time for high society. He wouldn’t join any clubs. He refused to be in Who’s Who in America. You’d have to search long and hard to find his name listed on the Board of any companies. He turned down an invitation to play golf at John D. Rockefeller’s private course because he thought golf was “a rich man’s game.” He was asked to run for both Mayor of New York and for Congress; his response to both offers was “I’m a butter-and-egg man.”

Having made his fortune in the grocery business, he set about his real passion: breeding horses. He bought trotting horses for harness-racing, and by the end of the nineteenth century his stable was winning races at Belmont Park in Long Island. He and his wife, Mary Rorke, were living in rural elegance in a Victorian mansion on a 350 acre property in Westchester County called East View Farm, and, as he was now a country gentleman of some wealth, he liked to be known as “Squire Butler”.

Butler was notoriously tight-fisted and resented the considerable cost of transporting horses to the racecourse at Belmont Park. His solution? Build his own racecourse: Empire City in Yonkers. Empire City billed itself as the workingman’s alternative to the snooty track at Belmont. It was called “the little track beside the water tower.” It didn’t bother with many of the niceties of Belmont. The track was seldom watered down because Butler refused to waster water; punters would walk away from the stand covered in dust.

There was – and still is – more money to be made in racing thoroughbreds than in harness-racing; Squire Butler wanted a piece of that action. There was a problem: the New York Jockey Club wouldn’t give him a license, probably because although he was rich, he was an Irish Catholic and an outsider as far as the Protestant Blue Bloods who ran the Jockey Club were concerned. In 1907, after a three-year court case, he was finally granted a racing license.

Butler bought horses the same way he bought goods for his grocery stores – in quantity. Some of his more famous winning thorougbreds were Direct, Directum Kelly, Questionnaire, Pebbles, Spur and Butler’s own favourite, Sting. In 1925 he turned down $125,000 for Sting, saying, “I’m a sentimental Irishman, and Sting will stay here until his dying day.”

His philanthropy was exclusively Catholic; he donated generously to Saint Patrick’s Cathedral. He bequeathed $100,000 to the Sacred Heart Convent in Tarrytown. He founded Marymount School, and later bought a Vanderbilt mansion on Fifth Avenue for use by the school. He died in 1934. 3,000 people attended his funeral in St. Patrick’s.