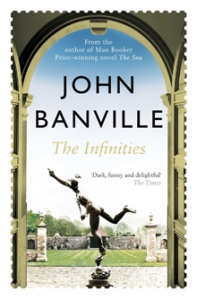 The Infinities (book and audio review)

John Banville must be sick of being told how beautifully he writes, and it is difficult to find a review of his novels that does not contain the words “luminous prose” or “darkly comic, brooding, malevolent style”. Or perhaps he is just fine with it. When he won the Booker Prize for The Sea, he famously rankled some by saying “it is nice to see a work of art win the Booker Prize.”

He has said on many occasions that his work is never good enough for him, though he considers it head and shoulders above that of anybody else. Indeed, when Adam Godley, the brilliant scientist in The Infinities, discusses his achievements, it is more than easy to imagine that the character is speaking on behalf of his creator, and it is a sly dig at both Banville’s many critics, his contemporaries and, oddly, himself:

But then did I not despise myself, also, myself and my work, my capitalised Work, of which I am supposed to be so vain? Oh, not that I think my achievement is less than anyone else’s – in fact I think it is more than everyone else’s, more than any of my peers could have managed – only it is not enough for me. You take the point. The world is always ready to be amazed, but the self, that lynx-eyed monitor, sees all the subterfuges, all the cut corners, and is not deceived. 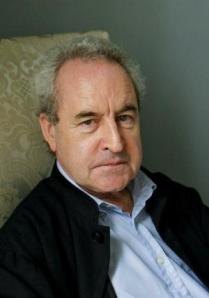 The Infinities is filled with subterfuge, misunderstandings, and missed opportunities. Like other Banville novels, there is meditation on death, focus on some of the grislier aspects of things (the skin of a plucked chicken has “the look and texture of the back parts of an old man”), and the seeming ridiculousness of being human.

Characters struggle in their frames with their “musty, grayish smells.” When one of them visits the bathroom, “she listens in mild dismay to the spashings and ploppings going on underneath her.” But unlike other of his work, there is a definite warmth – it is the only word – that suffuses the whole piece. Colum MacCann considers it Banville’s best work; it is certainly his most optimistic, and shows more of a sympathy with the perils of this dreadful life we live than his previous books.

Adam Godley is dying, and his family gathers at his house, Arden, deep in the Irish countryside, on Midsummer’s Day to see him off. But the gods are also watching, as they always do (“often we will gather at the ramparts of the clouds and gaze down upon them, our little ones, as they bestir themselves to welcome the new day.”) Most of the novel is narrated by the messenger Hermes, who is baffled by mortal ways, our very mortality, our pain, our love, our heartache. Mortal love, in particular, is bewildering:

We gave them that irresistible compulsion in the loins – Eros and Ananke working hand in hand – only so they might overcome their disgust of each other’s flesh and join willingly, more than willingly, in the act of procreation, for having started them up we were loath to let them die out, they being our handiwork, after all, for better or, as so often, worse. But lo! see what they made of this mess of frottage. It is as if a fractious child had been handed a few timber shavings and a bucket of mud to keep him quiet only for him promptly to erect a cathedral, complete with baptistry, steeple, weathercock and all. Within the precincts of this consecrated house they afford each other sanctuary, excuse each other their failings, their sweats and smells, their lies and subterfuges, above all their ineradicable self-obsession.

Adam has suffered a stroke, and Hermes comments “how oddly innocuous, even pretty, a term this is for something so unpleasant and in this case, surely final – as if one of us had absent-mindedly laid a too-heavy hand upon his brow.” It is an image Banville has used before.

Adam also narrates the novel (are Hermes and Adam one and the same?), and he is mostly upset at being left in the Sky Room, his old study, “after been so curtly knocked off my pedestal,” as he would prefer to die outdoors. “Yes, on a pallet somewhere, on the grass, under trees, at the soft fall of dusk, that would be a boon, a final benison.”

Adam has posited – and proved – the existence of the Infinities; indeed, an infinity of infinities, other worlds “all crossing and breaking into each other, all here and invisible, a complex of worlds beyond what anyone before him had imagined ever there was.” Adam and the others exist, it seems, in one of these alternate universes, a world where it was Elizabeth who was the traitor beheaded by Queen Mary, the Borgias are remembered as peaceful, Sweden is forever at war, and cars sun on saltwater.

Banville’s mordant sense of humour usually veers towards the cynical, the morbid, and the sad bewilderment of the world. But here he presents us with a narrator who is quite happily astonished by what he sees. Little things, as always in Banville, are written about in considerable detail: how one character rolls a cigarette one-handed (“what skills they acquire, in their little span of life!”), the sleep in the canthus of the eye of another, how the air feels before and after thunder, how priests smell (“Wax and ashes.”), the look of gin “shinily metallic with the faintest tinct of paraffin-blue in its depths.”

That the novel is set at Arden on Midsummer is of course no accident, and as in Shakespeare, the gods, sprites and nymphs here are mischievous and fickle, and do their best (or worst) to bring lovers together or keep them apart. Pan appears in disguise as an old friend. When Hermes isn’t thrillingly watching the comings and goings of the Godley family he has to do his father’s bidding. Zeus has designs on one of the house’s occupants, the beautiful Helen, whose head is “an exquisite, cream and-gold inverted egg that sits on its pale length of neck as on a plinth of polished stone.” In order for Zeus to ravish her disguised as her husband, Hermes has to hold back the dawn for an hour:

Imagine what effort that little feat of prestigitation involved: the stars stopped in their courses, the rolling world restrained, all chanticleers choked. And then the readjustments afterwards! You try telling that hotspur Phaeton why he was reined in, or rosy-fingered Aurora why I had to shove her in the face.

This is wonderful stuff. The Infinities was published in 2009, when Banville was in his mid-sixties. It came after the success of The Sea, and after Banville had discovered his alter-ego Benjamin Black, who writes fantastically grim crime-novels in the semi-nostalgic fog of 1950s Dublin. Banville has said that writing the Benjamin Black novels has given him a new lease on life, and I think The Infinities is his way of saying to his critics “see, I can be warm and sympathetic, up to a point.” Although Hermes promises that everything will come out all right, even if he has to see to it himself, Death still lingers, and there is little promise of what, if anything, will come after. After all, as Hermes comments, “to make a happy ending one must stop short of the end.”

As usual with Banville, the prose is beautiful, and this is a book to be savoured. It is also well worth listening to the audio book, read by Julian Rhind-Tutt. It is odd at first to hear a work that is most definitely Irish spoken in a decidedly English voice, especially when that voice speaks of the famine, hurley sticks, spalpeens and the rebellion at Vinegar Hill. 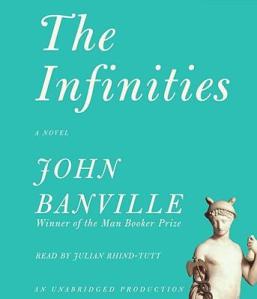 But this is an alternate world, after all, and in any event Rhind-Tutt does a fine job distinguishing the sound of characters’ voices, and prose as gorgeous as this is well-served by his arch and mellifulous tones. The audio version has eight CDs and runs more than nine hours, but it is a wonderful nine hours, for you need a good voice to be able to speak a passage as moving as the following:

He gazes into the twilit garden. Thick, tawny sunlight creeps along the grass, drawing spiked shadows in it wake. The trees tremble, talking of night. The birds, the clouds, the far, pale sky. This is the mortal world. It is a world where nothing is lost, where all is accounted for while yet the mystery of things is preserved; a world where they may live, however briefly, however tenuously, in the failing evening of the self, solitary, and at the same time together somehow here in this place, dying as they may be and yet fixed for ever in a luminous, unending instant.

If you liked this article, you may also like: Baffled in Toyland

7 thoughts on ““The Infinities” by John Banville (book review)”