An unfortunately-titled film, as it performed a vanishing act of its own at the cinemas this summer, this is a heist film with a promising twist – magicians who rob banks and do it as a show in front of thousands – that is fun but doesn’t live up to is potential. 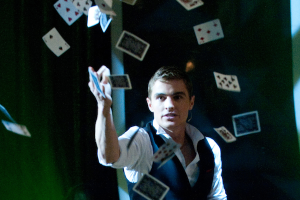 The Four Horsemen (Jesse Eisenberg, Woody Harrelson, Isla Fisher and Dave Franco) are street magicians who come together at the behest of an unknown operative, supposedly a member of The Eye (a secret order of magicians dating back to Egypt at the time of the Pharaohs). It’s a fairly complicated plot involving magician lore and fabulous illusions, with all sorts of misdirection and sleight of hand, and I lost count of the number of times a character pointed out another character’s general cluelessness.

Who is the Fifth Horseman? What exactly is his/her aim? The 4 Horsemen have no clue but in the meantime are having a ball stealing millions, becoming famous showmen as they do it. Their act takes place in three parts in three cities: Las Vegas, New Orleans and New York. The three locations tie in with the three acts of the film and the three parts of a magic trick: the pledge, the turn, the prestige.

The illusions are pulled off well, and the film is honest enough with the audience to show you exactly how each trick is done (that information, of course, is never really an answer, just another red herring in what turns out to be a much bigger picture)

Dogged FBI agent Mark Ruffalo (scruffy and surly) teams up with beautiful Interpol agent Melanie Laurent to try to take the magicians down. Don’t be surprised when they start making goo-goo eyes at each other (a subplot that is poorly developed and serves only to distract from the main story: perhaps it was done on purpose). Morgan Freeman and Michael Caine also show up.

Now You See Me is fun, but sadly not entertaining enough considering its premise and potential. The cast of characters perhaps is just too large (you never really get to know any of these people), and the audience will have its loyalities divided between the Robin Hood magicians and the FBI chasing them. That said, it’s worth watching. As a film about magic and cons, this isn’t anywhere near as good as something like The Prestige, but it has far more likeable characters. As a magic show, although it’s well done, your jaw won’t be on the floor, unlike this guy:

Perhaps it’s time to talk about the curse of The Social Network. David Fincher’s Facebook movie was the film of 2010. A moment in cinema and culture that perfectly captured the zeitgeist, with near-perfect performances all around, that won over critics and scooped practically every award going. But few of those involved have been able to capitalise on that film’s success. Fincher’s The Girl With The Dragon Tattoo was a disappointing thriller that only ever felt like a warmed-over version of the Swedish original. Screenwriter Aaron Sorkin‘s The Newsroom got hammered by critics and viewers for its pompous, sanctimonious tone. Armie Hammer, stumbled with The Lone Ranger. Andrew Garfield is off doing silly Spiderman stuff. Eisenberg’s films have generally only been so-so.