Just the other day I watched one of the early films that alerted Hollywood to Leonardo DiCaprio’s talent, 1994’s The Basketball Diaries, the grim druggy movie based on the autobiography of New York poet Jim Carroll. This was DiCaprio after the child of What’s Eating Gilbert Grape but before the global superstar of Titanic. Rail-thin, self-loathing and attacking every inch of the movie frame, DiCaprio gives what is usually hailed as “a bravura performance” as the Catholic schoolboy basketball star who becomes a strung-out heroin addict rentboy.

I don’t think it’s a great film: it hasn’t aged well, it looks quite cheap and dated in places, it has an uneven tone and there are moments of direction and editing that look frankly amateurish or that reek of film school. As a film about the dangers of drugs, it’s very good and very earnest, without any of the bleak humour of Drugstore Cowboy or Trainspotting. Lorraine Bracco performance as Jim’s mother is as overwrought as anything you’ll see in a 1930s Warners social drama. However, it has some wonderful stuff: Bruno Kirby as the basketball coach who’s also a child molester; a young, cherubic-faced Mark Wahlberg as Jim’s bullying friend and fellow junkie; Michael Imperioli as a kid with leukemia; Juliette Lewis, excellent as a used-up crack whore.  You’ll also briefly see Michael Rapaport doing what he does best, goofily beating people up.

And DiCaprio is very good in it, though, and you can see why critics were so quick to praise him. The early 90s, remember, in spite of a backlash against the muscle-bound macho heroics of the 80s, wasn’t really a good place for a fey young Hollywood actor. River Phoenix was dead, none of the pretty boy Beverly Hills 90210 kids could make the leap to movies, Brad Pitt announced his presence as a sexy, hyper-masculine cowboy, and nobody quite knew what Johnny Depp was up to, or whether to trust him. And here was a thin, golden boy with a girl’s lashes, the face of a cherub, talent and an apparent masochistic streak. The comparison to James Dean was almost inevitable.

In the end, he didn’t turn into the new James Dean. Instead – and maybe it’s because he makes so many films for Warner Brothers – he always makes me think of John Garfield. He has spent the last few years cornering the market in angry, wounded, blue-collar, orphaned men, attacking, defending or weeping over their fathers or father-figures (Gangs of New York, The Departed, Body of Lies), or angry, wounded, white-collar, stunted men grieving over, wailing, or yelling at their women (Revolution Road, Inception, Shutter Island, The Great Gatsby).

There seems little in him that will allow for joy. With the notable exception of his ripe and hysterical turn as a slaver in Django Unchained (for which I think he should have won the Oscar that went to his co-star Christoph Waltz), his performances have become earnest and studied, bitter and miserable. In giving himself over to an unsubtle, past-his-peak Martin Scorcese, he has been allowed to wallow and chew the scenery to a frightening extent. Here he is now screaming at the crowd in the trailer for The Wolf of Wall Street. It’s for Scorcese again: it looks like Goodfellas meets Wall Street (which might be cool), but there’s just as much chance it will be Casino meets Wall Street: Money Never Sleeps (which would be just as terrible as you think).

So it was with much hope that I rented the 2011 film J. Edgar, thinking that DiCaprio’s excesses as an actor would be reined in by the low-key, no bullshit directing style of Clint Eastwood. I remember seeing the ads for it when it was in the cinema, and thinking it looked damn good. It had a lot of promise: a script by Dustin Lance Black, who won the Oscar for the brilliant Milk, an authentic mid-century period feel (Eastwood’s previous venture into the Depression was the wonderful, underrated The Changeling, the film that gave us Angelina Jolie’s best performance), and most of all, a fascinating subject, FBI Director J. Edgar Hoover, the man with more secrets than Wikileaks, who led a curious double-life, and who was loathed and feared by … well, practically everyone.

I’m disappointed to report that while it’s marvellous-looking and well-acted, it’s an unsatisfying, disjointed film that offers us fascinating glimpses of Hoover without ever getting to the core of who he was. The screenplay is a confusing mess of changing timelines and voiceover. It has a clunky framing device of Hoover as an old man dictating his memoirs, so that much of the film is in flashback. I understand that this backward view can be a good way to unroll 50 years of a person’s life, but the structure stinks of scriptwriting 101.

Just as we get an idea of what makes Hoover tick, the script jumps to a different point in his life, and it never sticks around long enough to do anything other than standard heavy-handed biopic moments. We see him as a stuttering young man working at the Department of Justice and eager to ferret out as many Bolsheviks as we can. We see him at home as a mother’s boy, dominated by his mother (Judi Dench), pushing him in his career and telling him she doesn’t want “a daffodil for a son.” We see him young and sweet with his lifelong devoted secretary Miss Gandy (Naomi Watts), then old with her, and then young again meeting the man who would become his lifelong companion Clyde Tolson (Armie Hammer), then old again threatening Bobby Kennedy and wire-tapping Martin Luther King. Then we’re back to an earlier time and Mother is dead and Edgar is trying on her clothes and crying a lot. Then he’s rowing with Clyde. Then they’re kissing. Then they’re both old and feeble.

Two hours of this would wear anybody out, and Eastwood deserves kudos for a non-fussy approach (a frenetic style would be too much with this many time-jumps). But this is an Imagine production, and I couldn’t help thinking that perhaps Brian Grazer should have handed this project to Ron Howard, who did so well handling actors in ageing make-up and a story steeped in paranoid mid century America in A Beautiful Mind.

The cinematography, magnificent production design and makeup are the real stars of the film. The film’s overall look is muted and brown, the pace is … shall we say stately? Just as the script and Eastwood get some energy going (hunting down Commies or chasing gangsters), the story jumps back to Old Man Hoover remembering something else, and everything slows down again while we adjust to seeing the cast in a different decade (different clothes and different ageing makeup). 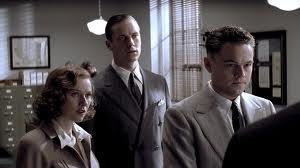 The cast is adequate. For the most part, Eastwood has managed to hold DiCaprio in check (except for one histrionic argument with Hammer that would embarrass Joan Crawford). Hammer is … solid, I suppose, is the politest word (is the man forever destined to play stiff Ivy Leaguers?) Judi Dench does well enough with what could have been a one-note Mother Knows Best role. Naomi Watts is excellent as always, and her Miss Gandy seems to be the only consistent character in the film. She declares herself more interested in work than marriage, and the last we see of her is working: Miss Gandy essentially saved Hoover’s reputation from complete ruin by destroying all his confidential files after his death. Who knows what secrets disappeared?

Mind you, dating Hoover wouldn’t give her much hope of marital bliss. His idea of romance is to show her his index card collection at the Library of Congress. And when a man says “call me Edgar, that’s what Mother calls me,” what’s a girl to think? Was she simply devoted to Hoover? Or was she just career-driven and hitching her star to his wagon was a way out of the drudgery of the secretary pool and allowed her an excuse not to go husband-hunting? She and Hoover arrest people on Valentine’s Day, at her suggestion. 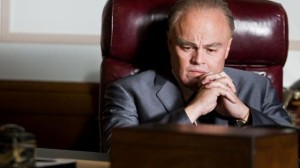 By the end Hoover remains an enigma and a mess of contradictions. We never learn why his mother favoured him so much over his brother (in fact, we barely even see his brother). The stammering momma’s boy blackmailed presidents and ruined the careers of junior agents when he felt threatened by their successes, but he also invented modern crime-fighting and believed in forensics and fingerprinting when others thought they were the pursuit of cranks. He vowed to keep the FBI out of politics, then tried to force Martin Luther King not to accept the Nobel Prize after listening to a tape of King and a woman in a hotel bedroom. This vendetta seems to be motivated by Hoover’s sexual insecurity and his mother’s bigotry, yet both Tolson and Miss Gandy offer only meek resistance to his tyranny.

Similarly, we never really learn the exact nature of his relationship with Tolson. Edgar seems taken with Clyde’s suave, gentlemanly demeanour and his bespoke suits. Why Tolson likes Hoover is not clear. Is it just the chance to be his right-hand man and power behind the throne? Tolson is set up as the film’s moral compass, questioning Hoover’s illegal and unethical running of the Bureau (there is a lot of Jedediah Leland and Charles Foster Kane about the two of them), and in the beginning he is the easily the more dominant, forcing Hoover to choose to give up all associations with women. Yet he too soon succumbs and lets Hoover browbeat him.

The film seems never clear on whether Hoover was gay or bisexual, or if he was just a man who liked to wear women’s unmentionables. He doesn’t like to dance with women at all, yet implies he’s sleeping with Dorothy Lamour. There are only two kisses between the two men. Clyde plants one firmly on Edgar’s mouth during a fight, and later, when they are both old and grey, Hoover chastely kisses Tolson’s forehead. The film in the end offers a sliver of a love story between two complicated men, and perhaps also that of a lifelong friendship between Hoover and Miss Gandy, and it has a typical Eastwood romantic score. For me it needed to choose to either focus far more on the private insecure Edgar, or far more on the public ruthless FBI Director Hoover. Indeed, when J. Edgar was finished, all I could think was how the HBO film Citizen Cohn, mining similar territory, had managed to do both more effectively.