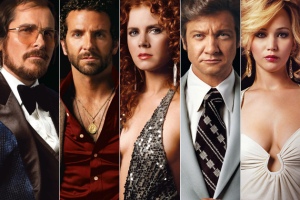 Oh, the 1970s. The decade of excess is a cinematic gift. Horrible clothes! Brutal décor! Bad hair! Awful music! Was there ever a subtle moment? It’s no surprise then that David O. Russell, a director who doesn’t like subtlety, would be drawn to the period. What is a pleasant surprise is that in American Hustle Russell has made a minor miracle of a film about small-time hoods, filled with crass people in hideous garb screaming at each other, that is wildly enjoyable, hilarious, moving, and ultimately brilliant.

The film is based on a real case involving con-artists, inept FBI agents, the mob, a fake sheikh and crooked politicians. Rather than the standard ‘Inspired by a True Story’ at the beginning, we are presented with ‘Some of this actually happened’, as if Russell and his cohorts are astonished by the events and characters.

And what characters. At its heart is a love triangle made up of Irving (Christian Bale), a fat, slobbish grifter with a ridiculous comb-over and something of a conscience, his smart, manipulative girlfriend Sydney, partial to plunging necklines and a posh English accent (Amy Adams), and Richie (Bradley Cooper), the ambitious FBI agent with a perm, who coerces the couple into working for him in a sting operation, and who has his sights on Sidney. The trio form an uneasy alliance; there’s a lot of back-stabbing and double-dealing, and nobody really trusts anyone.

The sting involves getting the Mayor of Camden, New Jersey, Carmine Polito, (Jeremy Renner) to take a bribe (and get others to do likewise) in the belief that a Middle Eastern oil baron (Michael Pena) wants to invest in Polito’s scheme to bring casinos to Atlantic City. As with all back-room politics, there’s a lot of wining and dining, and unfortunately for Irving that means bringing along his wife, the dangerously unpredictable Rosalyn (Jennifer Lawrence).

Russell has a love of actors (Lily Tomlin and George Clooney might disagree) and a fairly loose directing style. The film runs over two hours, but it moves briskly along (the film had three editors). Russell isn’t big on composition, and his camera is forever roving, even when the scene is just two people sitting in a room. He pans down to a person’s hands, then back to his face, for no apparent reason (the hands are invariably empty: is that because everyone’s talking bullshit?). He slows the camera down or uses it to zoom in on a ringing telephone. All this can get a little distracting, and between the camera moves, the groovy soundtrack (over thirty songs), and the multiple voiceovers, you might be forgiven for thinking Russell has come down with a case of the Scorceses – especially when

Robert de Niro shows up in an uncredited cameo. Mind you, it’s a great scene, and I wish de Niro had stuck around longer so he and Bale could warily eye each other some more.

Russell has assembled a strong ensemble. For the most part, Russell’s actors deliver note-perfect performances. Irving is cautious, weak and troubled: he may just be the nicest con-man in the world, and Bale is magnificent in a showy role. The character is larger than life, but at no point does Bale go over the top with it. Cooper is also very good in an unlikeable part. Richie is pathetic, grasping and belligerent. He literally growls at his boss in fury before pleading in a broken voice with Sydney to have sex. I think Cooper’s range as an actor is quite limited, but what he does, he does very well. Renner has lots of fun – and a marvellous hairdo – as the well-meaning, pragmatically corrupt Polito.

Jennifer Lawrence is the only weak link here, but it’s not entirely her fault. Rosalyn is an unstable, drunken, irresponsible, malicious bitch (“the Picasso of passive-aggressive karate”, as Irving says). Lawrence makes the best of it, and as usual she’s a fearless actress (she hilariously mimes and dances to Wings’ “Live and Let Die” while doing housework and plotting against Irving), but the character is as broadly written as Melissa Leo’s in The Fighter. 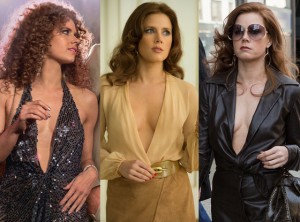 Amy Adams is the real standout. Because of her looks, her personality, and the sorts of plucky role she usually plays, I have always thought of her as Nicole Kidman’s perky, sexy little sister. But here she is given the chance to create a real character not soon forgotten; it’s a performance that makes you realise how under-used she has been. At first all you notice is the plunging neckline of her dresses, but she goes beyond the merely decorous. Sidney is sharp, vivacious, vulnerable, and resilient. She has one scene early on where she tries to convince Irving to flee the country rather than work with the Feds. “We can make it an adventure like we make everything.” When that doesn’t work, she agrees to go along with the con, but tells Irving that they’ll plan a back-up move against Richie. As she explains the idea, Adams shifts effortlessly into the English accent of Sidney’s alter-ego, “Lady Edith”. The scene is about deception (“we are bullshit; you are bullshit”), but it’s also about how an actor prepares for a role. I don’t think it’s a coincidence that Russell shoots the scene in unglamorous lighting or that Adams is without makeup.

Acting and make-up are important elements of the film, which is why we often see the characters getting ready to go out: getting ready to get into character. So we see Pena getting into a sheik’s robe, Adams, Lawrence and Cooper in rollers, and Bale going through an elaborate routine with his unconvincing hairpiece.

This is not Stephen Frears’ Grifters or David Mamet’s House of Games. Russell is less interested in the technique and execution of a con, and more concerned with the emotional beats of the story and the lives of the characters, and unlike Frears and Mamet, he cares about the people involved. Another director might take the same material and invite you to ridicule them, and although Russell (The Fighter and Silver Linings Playbook) has made a very funny film, he knows how to carefully balance comedy and drama. The film also feature Louis C.K. as Cooper’s frustrated boss, and the Internet has had a lot of fun at his expense in the last few days.

American Hustle is Russell’s best film yet. It was shut out at the Oscars, losing to more “important” films, which The New Yorker’s David Denby anticipated in a very interesting piece here.

8 thoughts on “Believing What You Want To Believe. American Hustle (DVD Review)”