Today’s post for the ongoing Royale with Cheeseathon comes courtesy of Anna at Film Grimoire, a truly fantastic (and not at all grim) film blog that’s well worth checking out. Anna reviews new film and television shows, as well as writing about some classic (and not classic) films from the vaults, and she has many astute observations. On Faye Dunaway as Joan Crawford in camp guilty pleasure Mommie Dearest: “I have never seen a draggier performance by a non-drag queen before in my entire film-watching life. Faye Dunaway is the very definition of camp as Joan Crawford. She should have earned a PhD in scene chewing after this masterpiece of mastication.”

Take it away, Anna

I love Pulp Fiction, so much that I’m not able to write an actual review about it. If I were to write a review, it would be so boring because it would just be a constant outpouring of love and happiness, and no one wants to see that. In lieu of a full review of this excellent film, and in order to pinpoint the exact reasons why I love it, I’ve decided to list five random things (in no particular order) that I love about Pulp Fiction.

I wish that I had been old enough to watch this film when it came out in cinemas for many reasons, one of which is the music. Imagine watching this film in a big cinema with this music in surround sound. It would have been the best experience ever. From the toe-tappingly awesome guitar of Dick Dale’s rendition of ‘Misirlou’ and the funky bass and brass of Kool and the Gang’s ‘Jungle Boogie’, to the crooning surf rock tones of ‘Girl You’ll Be A Woman Soon’ by Urge Overkill, there’s something for pretty much everyone. Tarantino never commissioned an actual film score for Pulp Fiction, choosing instead a range of songs that sound like “rock and roll Ennio Morricone music”. What has resulted is an impressively put together compilation of music from lots of different genres that ends up sounding as if it all could have been composed and tailored to this one film. I’ve put Pulp Fiction on the TV at home so that I can listen to the music (and amazing dialogue) whilst cleaning the house, and I’m not ashamed of that. 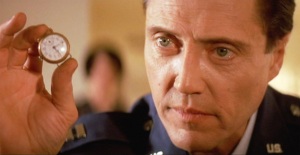 When I first watched Pulp Fiction, at the beginning of this scene I wasn’t sure what to think. Suddenly we’re back in the 50s/60s? Is Tarantino pulling some cross-generational cut-up narrative time trick? I wouldn’t put that kind of cinematic shenanigan past him. However, this scene was an excellent use of a flashback to establish character motivation. In this scene, the boxer Butch Coolidge (played by Bruce Willis) remembers a moment in his childhood where his father’s old army buddy (Christopher Walken) bestowed upon him a resplendent golden watch, and explained its family and military history; telling him exactly why the watch is so important, and why he should keep it safe forever. This scene very cleverly toes the line between hilarious and completely serious, and you can never go wrong with anything Christopher Walken is involved with. His monologue in this scene sticks out as one of the most memorable monologues in the film.

3. The fact that we’re never told what’s in the briefcase

Perfection. It’s like the unseen head in the box from Se7en (1995), but better, because in this case the opportunities for the contents are limitless. Is it drugs? Is it cash? Judging by the gold light that bounces off the characters’ faces when they open it, is it filled with gold bars? Will we ever know? I think half of the fun is in not knowing. I also love that the briefcase is essential to the plot, yet totally irrelevant to the majority of the events in the film. It’s one of those classic MacGuffins that people will be pondering for a long time. I know that in real life it was just a golden coloured lightbulb set to switch on when the case was opened, but that doesn’t stop me from wondering what Tarantino might have in mind for the contents.

I really like and appreciate Samuel L. Jackson, even in Snakes On A Plane (2006). But his performance as Jules Winnfield in Pulp Fiction is straight-up amazing. As a disillusioned killer who has a strong commitment to a moral code, and is sure that he’s yet to serve a higher purpose, we see a transformation in Jules’ character over the course of the film that takes him from one end of the thug spectrum to something else entirely. It’s interesting to witness the actions of a spiritual assassin, between his discussions and wonder at the miracles that seemingly occur throughout the film, to his iconic interrogation of someone who transgressed against his boss; my personal favourite line being, “Does he look like a bitch?”. Throughout all this action, SLJ grounds his character so well that he’s almost relatable, even if you’ve never worked as a professional assassin before. 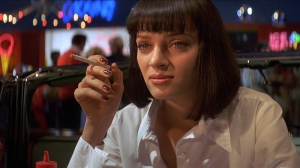 5. This piece of dialogue

Mia: Don’t you hate that?
Vincent: What?
Mia: Uncomfortable silences. Why do we feel it’s necessary to yak about bullshit in order to be comfortable?
Vincent: I don’t know. That’s a good question.
Mia: That’s when you know you’ve found somebody special. When you can just shut the fuck up for a minute and comfortably enjoy the silence.

Thanks, Anna, for that great article. Anna is the second person this week to tell me she was too young to see Pulp Fiction in the cinema. Thanks, Anna and V for making me ancient.

If you would like to join the Royale With Cheeseathon, please email me at ragingfluff@yahoo.ca. I’ll try to post your articles as fast as I can, but the old joints give me fierce trouble some days.