Ever since I was a teenager, people have been telling me I look like Noah Taylor. When I was about 17, the brother came in and said, “I just saw you in a film called The Year My Voice Broke. Same hair, same face, same glum expression.” By “glum” I’m sure he meant “thoughtful”.

When I was in college in Dublin, an Australian girl I knew asked me if I knew I looked like this little-known Aussie actor called Noah Taylor. A few years later, I had long, unkempt hair and wore glasses: people remarked how similar I was to that bloke in Shine. And a few years after that, an old friend saw Almost Famous and sent me the following email: “dude, did you somehow manage to get yourself into a movie?”

Taylor is a few years older than me. I’m taller and better-looking. Perhaps it’s not that I look like Noah Taylor; maybe it should be he looks like me. 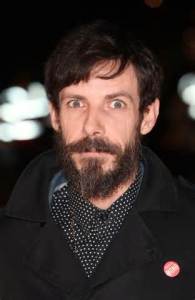 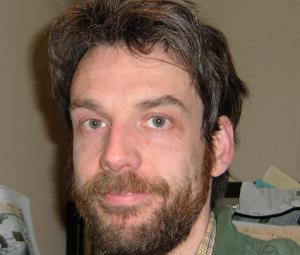 It is sort of fitting, then that my doppelganger shows up in a small role in The Double, Richard Ayoade’s very funny take on Dostoevsky“s classic doppelganger story. Nerdish Simon James (Jesse Eisnberg) is an awkward, badly-dressed, gawky clerk in an office that resembles something out of a Kafka nightmare: his job seems to consist of making reports that nobody wishes to read. His boss, Mr Papadopolous (Wallace Shawn) doesn`t know his name even though he`s been there seven years. Simon is disconsolately in love with his co-worker Hannah (Mia Wasikowska), who also happens to be his neighbour, and who he spies on in her drab apartment.

Simon`s life is changed with the arrival of a new employee, James Simon (Eisenberg again), who is the exact physical duplicate of Simon, but whose personality is the opposite. Simon is shy, clumsy, overlooked; James is outgoing, charming, a go-getter. And nobody else seems to notice that the two men are identical. Soon James is taking credit for Simon`s work, and going after Hannah, and doing all he can to erase Simon from everyone`s memory. Hannah barely notices Simon but is besotted with James, something that of course befuddles Simon.

The film is bleakly funny and has a distinct look and tone. The setting is grim and Kafkaesque and difficult to pin down It looks vaguely like Eastern Europe, but also a lot like a grimy UK, and half the cast are American. Similarly, the technology is all over the place (rotary telephones, early 80s-looking video games, ancient photocopiers, old jukeboxes). There is a running gag involving an awful-looking sci-fi television show called The Replicator that looks like a cheap episode of Blake`s Seven crossed with Mighty Morphin Power Rangers. Adding to the confusion is the film`s soundtrack, which is mostly Japanese synth-pop.

Instances of Doppelgangers have been linked to insanity and psychological anxiety, and if you want to, you could choose to believe that the confident James is a manifestation of the nebbish Simon`s subconscious. That idea is explored more deeply in another Doppelganger tale from last year, the very unsettling and very good Enemy, Denis Villeneuve’s loose adapatation of a novel by Jose Saramago.

Jake Gyllenhaal is Adam, a rather musty history professor. He lectures his students on how dictatorships function and on the Hegelian notion that everything in history happens twice. He tells his students about patterns in history, particularly in regard to state control, which is ironic as he repeats patterns himself in his relationship with his girlfriend, Mary (Melanie Laurent) in their drab apartment. Patterns – in particular a rather distinct one – are very important to this film, but I won`t say why as I don`t wish to spoil it.

As in The Double, Adam sees his exact twin, a man called Anthony, and again, the two men have different personalities.Adam is basically boring and leads a dull life. Anthony is sexually aggressive, athletic, and is a member of an exclusive underground sex club where women undress and do nasty things to bugs. Anthony is an actor (the outgoing artist in contrast to the rational academic) who lives in a plush condo; he is married (perhaps unhappily) and his wife, Helen (Sarah Gadon), is six months pregnant. Gadon and Laurent do not look that dissimilar, which I suspect is deliberate casting.

Enemy was filmed in Toronto, and Villeneuve has managed to make it look as bleak and washed out as it did in early Cronenberg films. Cronenberg cannot be ignored as an influence here; there`s a lot of David Lynch in here as well, not least in the presence of Isabella Rosselini. Enemy is a very creepy psychological thriller; you won`t laugh once, and it will leave you puzzled and perhaps a little unnerved. As for the final seconds of the film, it has been described by one critic as “the scariest ending of any film ever made.”  It’s certainly a shock, and will immediately make you want to watch it all over again in an effort to understand what, if anything, has transpired.

The film opens with a quote from the Saramago novel: “Chaos is merely order waiting to be deciphered.” It’s a sophomoric observation, at once profound and pretentious. It reads like something I would have written in an undergraduate essay, and it is debatable if the film does actually decipher the chaos.

Does Anthony actually exist or is he just a figment of Adam`s imagination? Or vice-versa? Mary is not pregnant and Helen obviously is, and I think this is a film as much about the anxiety that comes with an expected child. Or perhaps the film is about infidelity and guilt. Or perhaps it’s about nothing. It’s both maddeningly pretentious and eerily truthful. And trust me, the ending is terrifying.

In the central role(s), Gyllenhaal is very good, just as he is in Villeneuve’s Prisoners. He wears a beard, which makes him seem less boyish, and he finally has managed to do something to deaden the gaze of his large beautiful eyes: he no longer has the look of an abandoned puppy. He makes Adam and Anthony just different enough in movement and gesture that you know instantly which is which.

If you`ve seen Enemy, there is a very interesting take on what the film might mean here.

Both The Double and Enemy are well worth seeing … maybe even as a double-bill (ha!) Both use sound design very well to ratchet up tension and dread. The Double is an enjoyable, clever black comedy that will confirm Eisenberg as a talented actor who should do more films like this, and less like Now You See Me. Enemy is in a different league altogether (maybe even a different sport.) Do you remember how you felt the first time you saw Eraserhead or Videodrome?

As to whether Noah Taylor is my double or a mere imaginary construct (or vice-versa), well, all I can say is we have never been in the same room at the same time.

13 thoughts on “Spitting Images: “The Double” and “Enemy””