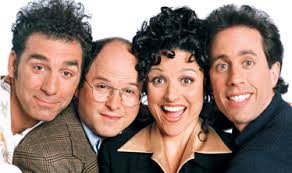 Seinfeld – the show famously about nothing – made its debut 25 years ago today.

The show’s immense influence and popularity continues; flicking channels, it’s almost impossible not to stumble on several episodes a day. The show’s genius lay not just in the fact that it was “about nothing”, but that the foursome – Jerry, Elaine, George and Kramer – were all fairly unlikeable.

The show also had a massive influence on pop culture and the English language, and even if you’ve never seen it, you’ve probably heard phrases like “yada yada yada’, “no soup for you!”, “master of my domain”, “double-dipping”, and “Serenity Now!”

Here is a selection of some choice Sein-language.

One who addresses you from an uncomfortably close distance. See also high-talker, low-talker, and long-talker.

A person who asks for silence by making a “shhh” sound; recipients are shushees. Some people, says Jerry, are unshushable.

To give an unwanted gift that one has received to someone else. The only word from Seinfeld to enter the Oxford English Dictionary.

A December holiday created by George’s father in protest against the commercialism of Christmas.

A secret told in confidence.

Sometimes a woman’s hands are less than feminine.

Not that there’s anything wrong with that

Originally used as a politically correct disclaimer indicating that while one isn’t homosexual, one doesn’t disapprove of it.

The sexual allure of gentile women, a play on shiksa.

The description of Elaine’s dancing.