I don’t know which is worse: The Interview or the idea that it might trigger World War III. Hacking Sony Pictures over this was a waste of perfectly good code. Thanks to the threats by the Guardians of Peace, and the defiance shown by cinemas and Sony to go ahead and release it, The Interview is probably going to make a lot more money than it deserves, which is unfortunate, as it’s crap.

Do you remember those supposedly wacky comedies from the 1980s with a couple of goofballs who wind up in the U.S. Army, take a wrong turn in West Berlin that puts them behind the Iron Curtain, where they stumble around and have all sorts of high jinks and almost set off a nuke? The Interview makes those sorts of films look like Citizen Kane. The Seth Rogen/James Franco movie isn’t just offensive to North Korea; it’s an insult to anyone who pays money to see it in the cinema.

Team America: World Police at least had some satirical points to make about Kim Jong-Il, Hollywood celebrities, and the flag-waving excesses of both Jerry Bruckheimer movies and the mood in the United States post-9/11. The Interview aims much lower, and is content to rely on fart jokes and schoolboyish smutty innuendo in place of story or character development.

There’s nothing wrong with a silly, broad and juvenile comedy, except when a silly, broad and juvenile comedy is smugly pleased with itself, which is exactly what The Interview is. You can almost hear the filmmakers yukking it up in the background at each hilarious sequence and every butthole joke, and it’s pretty clear they must have written several punchlines for each joke. It’s hard to watch this film and not see where scenes have been re-edited and lines replaced after an extensive round of preview screenings. I don’t expect The Interview was ever intended to be subtle, but would it really be so bad to let a scene run a few seconds longer and breathe? 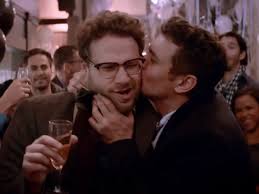 Seth Rogen plays the straight man to James Franco’s eternal child, but both characters are so wildly over the top and given so little to do, the comic potential in the pairing is dissipated. Rogen is uptight and neurotic; Franco is a mugging simpleton. They are both caricatures, but then again, all the characters in the film are ludicrous stereotypes, which is a real shame. The premise of an entertainment reporter meeting the celebrity-obsessed Kim Jong-Un is rich, but the film doesn’t really know what to do with it beyond the obvious. Kim is vain, insecure, and obsessed with Katy Perry, and Randall Park has a great time playing him, but he’s a cartoon character in a film filled with them. He should be the craziest character in the film, but he’s just another wacky part of a wacky tableau.

Each time the script runs out of ideas, it throws in a fastly-cut montage or a dick joke. I wouldn’t mind that – I like a good dick joke as much as the next guy – except when it’s clear the dick is just there to plug a hole in the story (see what I did there?) The genuinely funny stuff (Eminem; Rob Lowe) happens early on; later sequences rely on slapstick, boobs, hard-ons, F-bombs, and a running gag about being honeypotted (and occasionally honeydicked.)

11 thoughts on ““The Interview” is Terrible”