What’s It About? Despite having won an Olympic gold medal, wrestler Mark Schultz lives in the shadow of his gregarious brother, Dave, also an Olympic medalist. When wealthy wrestling enthusiast John du Pont invites Mark to live and train at his estate, he is drawn into a bizarre world dominated by du Pont’s erratic behavior.

Will It Win? Steve Carell is superb as the creepy, friendless eccentric billionaire John “Eagle” du Pont, who takes an unhealthy interest in wrestler Mark Schultz (Channing Tatum), and Mark Ruffalo is reliable as always as Mark’s older brother Dave. If Carell wins (and it’s a longshot), it may well be because of the brilliant makeup job that he’s working under as for anything else.

As good as Carell is, I can’t see the Academy giving him the statue, but that’s only because everybody has convinced themselves that Eddie Redmayne deserves it for The Theory of Everything. Likewise, Ruffalo’s performance, which is very good, is being overshadowed by J.K Simmons’ work in Whiplash. Bennett Miller’s direction is very careful, and the film’s production design should be acknowledged for reminding us just how hideous the 80s could occasionally be. The makeup and hairstyling work by Bill Corso and Dennis Liddiard deserves the Oscar without question; Carell looks unrecognisable, and Ruffalo and Tatum have similarly disappeared beneath latex and wigs.

Let’s talk about the Eighties for a moment. After Hollywood’s mining of the velvet textured, disco-driven 1970s for material, it may finally have moved on. Foxcatcher is set in 1987, which doesn’t seem that long ago in my mind, but is a different era as far as the movies are concerned. This is a period film, after all, and you may catch yourself marvelling at the floral wallpaper, the boxiness of the cars, and the clunkiness of some of the technology. Did people really sport spiked highlights like Channing Tatum’s? Sadly, yes.

Being set in the 1980s also allows for more sedate, less frenetic storytelling, fitting as its plot involves a rich man whose wealth was handed down from a bygone age (it isn’t an accident that the opening shots are of grainy black and white footage a 1920s du Pont family foxhunt). Because Miller wants to tell a story about the slow growth of obsession, the pace is slow and methodical. Miller’s Moneyball (set in the 2000s) moves at lightning-speed by comparison. With the exception of a shot of Tatum playing a ridiculously huge Gameboy, there isn’t a computer in sight. In 1987 the Internet didn’t exist; if it had, Mark Schultz would probably have Googled John du Pont before meeting him, and figured out for himself just how odd the man was.

As du Pont, Carell’s physicality is a wonder; not just the nose, of course. There’s perhaps a hint of Peter Sellers in Being There about his performance. Playing a man a good deal older than he is, he has slowed his gait down to an awkward waddle (Carell has always been a technically proficient actor – acting students should look at Little Miss Sunshine and how much he conveys character by the way he runs). There’s a brilliant moment in Foxcatcher when he begins jogging to impress a camera crew, and it’s both hilarious and pitiable.

But it’s his moments of stillness that really impress (and there are a lot; this is a very quiet film). du Pont has the profile and cunning of an eagle, and as he sits watching Schultz wrestling, you can see him sizing up his prey, and because his character is so unpredictable, the occasional sudden outburst of anger comes as a shock. du Pont is a pathetic character: friendless, insecure, still living under the thumb of his mother (Vanessa Redgrave). But he is not a cartoon villain, even if we have a culture which would just love to portray him as such (John du Pont was a member of the 1% long before we even began talking about the 1 %), and in creating the character Carell seems to have dug beneath the buffoonish surface of his most famous incarnation, The Office‘s Michael Scott, to unearth the bitterness, egomania and self-loathing.

Ruffalo is equally good as wrestling coach Dave Schultz. Beneath a receding hairline, beard and ugly glasses, he moves with the rolling grace of an athlete, and although he is an outgoing, hail-fellow-well-met character, and is filled with the confidence of an Olympic gold medalist, he also has a shuffling, servile manner when he is around his social superiors. Watch how he almost bows when he meets du Pont and his cronies. 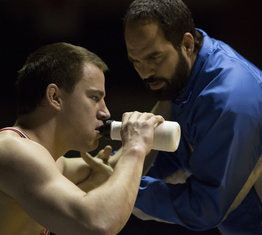 I expected Carell and Ruffalo to be good, but Tatum is the real surprise for me. Bulked up to the point his arms don’t touch his torso when he walks, he has mastered the look, manner and posture of this sort of athlete, the kind of youth who looks down most of the time, and who seldom looks you in the eye. Mark Schultz seems imprisoned by his physique, except on the wrestling mat of course, where he moves with a surprising lightness of foot.

Foxcatcher comes with a caveat – the most treacherous seven words in cinema: The following is based on a true story. There has been much talk from the real Mark Schultz about how the film distorts a few things, particularly around the film’s heavy homoerotic overtones. That’s as may be. I didn’t know of the real-life events before I saw the movie, and if you have not seen the film, I urge you not to look up anything about it. Bennett Miller and writers Dan Futterman and E. Max Frye have taken material suited to a Nightline special or a TV Movie of the Week and created one of the year’s best films, and a treatise on the corrupting influence of wealth and power in America. 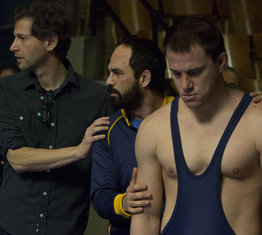