There were a lot of great lines in last night’s premiere of the new series Better Call Saul, the oh-so-we-really-want-this to-be-good spin-off from Breaking Bad. 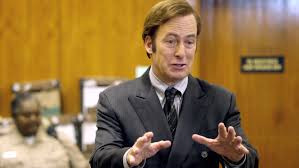 And nobody delivers a zinger better than Bob Odenkirk. As Saul Goodman, attorney of choice to Albuquerque’s declasse criminal underworld figures, Odenkirk became an essential part of the show – part comic relief, part amoral compass (if that makes sense), part pragmatic voice of reality in situations that were always moments from spinning dangerously out of control.

When I heard that they were planning to give Saul his own show, I was not enthusiastic. Over its run, Breaking Bad cut so deeply into the emotional core of Walter White as the high school teacher turned drug kingpin built his empire and then watched it crumble all around him, losing everything and everyone he ever loved in the process, that I thought it would be impossible for creator Vince Gilligan to even come close with a spin-off. 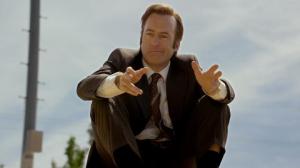 The good news is that on the basis of the show’s pilot (“Uno”) Gilligan and co-creator Peter Gould aren’t planning on trying to emulate Breaking Bad. Sure, the look of much of the episode recalled moments; the episode opened with a stylishly shot back and white flash forward that immediately made me think of the teaser shots of the teddy bear that were scattered throughout Breaking Bad‘s third season. And yes, the locales in Better Call Saul are so reminiscent of Breaking Bad (one street looked so like the street where Hank and Marie lived that I was looking out for Dean Norris driving by in his SUV). But it’s clear that Better Caul Saul is its own beast. 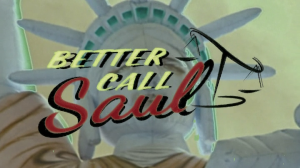 To begin with, look at the colours and design of title card. Loud and brash, just like the man himself. (also, a welcome flash of brightness after the devastation of The Walking Dead, which immediately preceded Better Call Saul on AMC).

Then consider the episode’s tone. It was funny. Very funny. There were tense moments and thrills, but overall this was a comedy, even if we meet our main character at his lowest point. If there is real darkness ahead – and there may well be – it might be a while before we get there.

Besides, how can you not love a show which quotes Ned Beatty’s speech from Network? 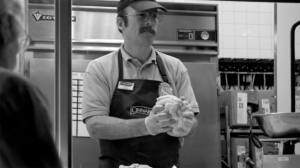 The black and white flash-forward was set at an unspecified time. We meet Saul in Omaha working at a Cinnabon (just as he predicted; it turns out he was right about that). The music on the soundtrack was The Inkspots, which briefly made me think of another desperate man at his lowest point, a drunken Andy Dufresne at the opening of The Shawshank Redemption. The Cinnabon setting, though, mostly made me think of this bit by Louis C.K.

All images from AMC

3 thoughts on “Justice Served!!! Better Call Saul Is Even Better Than We Could Have Hoped”