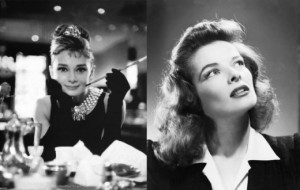 Although the two Hepburns, Katharine and Audrey, came from very different backgrounds, they shared a lot in common. They both became female role models and fashion icons (one for dressing like a man, the other for dressing like a princess). They both had a unique screen presence and voice, and they both stood out from their respective peers in terms of how they looked and acted.

In the early 1930s Katharine Hepburn’s success was a surprise to many: she was nobody’s idea of a movie star. She was the epitome of Yankee WASP privilege, using her height, her frame and above all, her voice to exude patrician authority, and although she had an adoring fanbase, many critics disliked her (of one of her stage performances, Dorothy Parker famously sniped ‘She runs the gamut of emotions from A to B’).

She wouldn’t take no for an answer; she was too pushy, too brainy, too progressive, strutting around in slacks and demanding to be treated fairly. She couldn’t be a gangster’s moll or a nightclub floozie. She couldn’t be a downtrodden housewife or hard-working waitress struggling to get by. She could have been a bitch, I suppose (and it’s interesting to contemplate a parallel universe in which she only ever played villainous roles). And she could have used her aristocratic bearing to play monarchs and duchesses (she did play Mary, Queen of Scots, but hated her performance and the film).

In the end, in a remarkable career – 12 Oscar nominations, 4 wins – what Hepburn did was seem to effortlessly play versions of herself: the snob (Alice Adams); the bookworm (Little Women); the flighty heiress (Bringing Up Baby and The Philadelphia Story); the priggish spinster (The African Queen); and the sparring partner to Spencer Tracy in an long-running war between the sexes (they made nine films together).

The Hepburn-Tracy partnership worked wonders (onscreen and off) probably due to the combination of her haughtiness, pluck, and guile, and his sly, gruff charm.

The Philadelphia Story was actually a comeback film for Hepburn; she had been declared box-office poison after several failures, and left Hollywood for Broadway. Philip Barry wrote a stage play especially for her, which she produced and starred in, and when it was a hit, she held all the cards when it came time to make a film version.

Nobody other than Hepburn could have played Tracy Lord, the cold, spoiled heiress with clipped Bryn Mawr tones. For much of the film it seems like she’s just playing herself, or playing with the audience’s image of her. “Oh, we’re going to talk about me, are we? Goody.” Speaking about their old yacht – “My, she was yar” – she stretches the vowel in that last word to an extreme.

Audrey Hepburn’s voice is also distinct and instantly recognisable (as was her singing voice, unfortunately, which is why it was dubbed by Marni Nixon for My Fair Lady). The petite star with the big eyes and pixie haircut – the word elfin could almost have been coined for her – had performed dance recitals as a child in Belgium during the war to raise money for the Resistance. She was famously discovered by the author Colette, and played Colette’s Gigi on stage.

She made her Hollywood debut, famously, in Roman Holiday, after Elizabeth Taylor and Jean Simmons were both unavailable. And it really is better that an unknown play the part, for how well-known is a princess? The film’s star, Gregory Peck, was so taken with her that he insisted the ingenue share billing above the title. 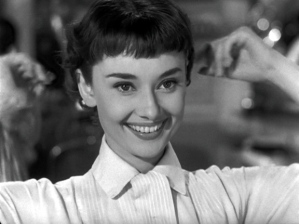 And then of course there was the dress. Hepburn must have seemed a dream come true to legendary costume designer Edith Head.

Hepburn went on to become synonymous with Hubert de Givenchy.

She got to wear beautiful dresses and the 1950s hipster uniform of black turtleneck and leggings in Funny Face (she’s a practicing ’empathycalist’).

Hepburn was every little girl’s idea of a princess (who wanted to be ordinary)in Roman Holiday, then in Breakfast at Tiffany’s she established for a whole generation of women what it was to be a single girl in the city.

It would make for a curious sociological study to discover just how many small-town girls moved to the big city because of Audrey Hepburn in Breakfast at Tiffany’s. And would that number be higher or lower had it been Marilyn Monroe in the role? When Truman Capote wrote the original novella, his conception of Holly Golightly – the flighty, vulnerable, tragic girl who gets paid $50 to go to the powder room – was closer to Monroe than anything else, and Monroe desperately wanted to play the part.

Monroe would have made an interesting choice, I think, and it certainly would have made for a more damaged Holly (and probably closer to Sugar in Some Like It Hot). And I think Monroe would have brought a harsher reality to the reveal of Holly’s back-story. Now, though, it is simply impossible to imagine anyone other than Hepburn in the iconic role. In fact, although the studio wanted her for the part, they assumed she wouldn’t want to play a call-girl, no matter how divine the gowns she wore. In real life Hepburn was far earthier than people realised, and although she is wonderful in it, it is a great shame that she didn’t get to play the role as it was originally written.

Cary Grant only agreed to make Charade if the story was changed so that it was she who was romantically interested in him.