I is for Ingram

I was thinking I would continue my A to Z Challenge on Old Hollywood with a general post about Irish actors in movies: Barry Fitzgerald, Maureen O’Hara, George Brent, Una O’Connor,  and so on. My good friend Beanmimo has already written two excellent articles on this subject, one about Irish Oscar winners, and one about one of the most mysterious figures of the early days of Hollywood: William Desmond Taylor.

In the end, though, I decided to do a quick post about another Irishman in Hollywood in the early days: Rex Ingram.

Born in Dublin, Ingram’s real name was Reginald Ingram Montgomery Hitchcock (when he moved to Hollywood, he changed it because he thought ‘Hitchcock’ would not be a memorable name for audiences – he advised Alfred Hitchcock to do the same).*

He emigrated to the United States in 1911, and initially studied sculpture at Yale’s School of Fine Arts. He had a chance encounter with Thomas Edison`s son, Charles, and soon found himself in New York working for the Edison Company as an actor, writer and set-designer. Later he worked for Vitagraph and Fox, eventually becoming a director/producer at the fledgling Metro Picture Corporation.

In 1921 Ingram got his big break when screenwriter June Mathis insisted that he direct her adaptation of The Four Horsemen of the Apocalypse, starring the world’s most revered star, Rudolph Valentino, who dances the tango with Beatrice Dominguez.

Ingram was allowed much creative freedom and the studio seldom interfered in his productions, which were always noted for their grand scale and visual values. He often drilled extras for hours before battle scenes so that they would look realistically battle-weary.

Films he directed include Turn to the Right, The Conquering Power, Trifling Women, Scaramouche, The Prisoner of Zenda, and The Arab. 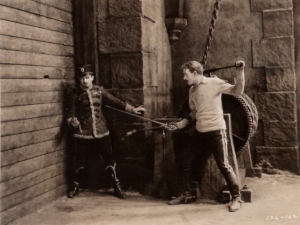 Many of his films starred his wife, Alice Terry.

In spite of the success of his films, he was not assigned to direct Ben-Hur, a film for which he was a natural fit. He had a long-running feud with Louis B. Mayer – Ingram’s films would often exclude Mayer’s titled “Metro-Goldwyn Presents …”.

He threatened to quit over Ben-Hur, but his friend, the great Erich von Stroheim, who considered him the greatest director in the world, talked him out of it. Ingram returned the favour: when von Stroheim’s Greed went over budget and was deemed too long, Ingram stepped in to edit it to ensure its artistic merits were not lost.

Eventually, Ingram grew tired of Hollywood and moved to France. He based his production unit on the Riviera and continued making films for MGM. He only ever made one talkie (Baroud) before retiring from the business, save for a time mentoring the young Michael Powell. He lived out the rest of his years writing and sculpting.

* Thanks, Beanmimo, for providing that brilliant piece of information.

4 thoughts on “I is for Ingram”