True Detective begins its second season on Sunday night. No doubt Etsy crafters will be studying the premiere for ideas: Colin Farrell’s moustache might just become the most talked-about facial hair of the summer, and much like his eyebrows, probably needs its own agent.

I’ve been trying to avoid reviews – which have been mixed – but am hopeful for the best, especially for Farrell, who has made some dodgy choices in his career, but who is a hell of an actor given the right material.

While the first season of the drama had supernatural overtones and dabbled in the occult, the second season is reportedly a more conventional crime prodecural, something that is sure to upset fans of philosophical mumbo-jumbo (the show perhaps suffers as drama as a result.) 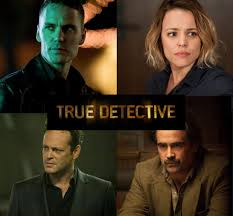 The original HBO series caught a moment in the zeitgeist and launched a thousand memes, and was a crucial step in the McConaissance. It remains to be seen if the new season will do for Vince Vaughn what the first did for Matthew McConaughey. 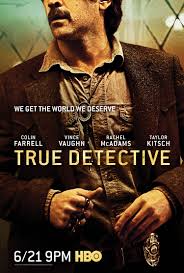 The first season was notable for many things: moody shots of backwoods Louisiana; beer can sculpture; Alexandria Daddario’s, er, talent; and a haunting title sequence which put a little-known alt-country duo The Handsome Family on the map.

The band’s song, “Far From Any Road” is both grim and catchy. Choosing a song for the second season’s titles was a tall order. If True Detective‘s second season is to succeed, you need a song filled with longing and loneliness.

How could anyone top lines like “When the last light warms the rocks/ And the rattlesnakes unfold/ Mountain cats will come/ To drag away your bones”?

Well, relax, we’re in good hands. HBO has chosen a track by the Maestro of Melancholy himself, Leonard Cohen (a man who could easily hold his own with Rust Cohle in an existential debate.)

Cohen’s gravelly voice intones “Nevermind” over the show’s titles, and listening to lines like “I had to leave my life behind/ I dug some graves you’ll never find” fills me with confidence that True Detective‘s second season will be just fine.

There’s an interesting article here about some of the music used in the new season.

A shorter version of this post first appeared at 2paragraphs.

11 thoughts on “‘True Detective’ Needs A Moody Title Song, and Leonard Cohen’s Got One”