Summer is almost over, so I feel I should do a quick recap of some of the literary and pop culture stuff I imbibed in the hot, lazy days of May, June, July and August.

I am not a summer person. I find the weather rather dull (except for when it gets so muggy that we have wicked thunderstorms, and we’ve had a couple of doozies in the last few weeks). Sitting in the sun is also not my thing, and insects of all shapes and sizes long ago decided that my body is a feeding ground, and no amount of bug spray will deter them from stinging, biting, and sucking my precious bodily fluids.

So while others are outside soaking up vitamin D or taking a dip in the lake, I look for a cool spot (preferably indoors) to sit and read a book or watch some decent TV.

Here are some highlights (and low-lights) of my season.

Easily the best TV show of the summer, and perhaps the best show of the year so far (honourable mentions to Better Call Saul and Fortitude). If you haven’t seen it, do something about that now. This smart thriller about computer hacking feels very much of the moment and yet also has a classic, timeless appeal.

Visually stunning, wonderfully acted, brilliantly written, and with the coolest music choices on the soundtrack, this is Appointment Television; a sophisticated, clever take on the conspiracy genre, with a delusional, paranoid unreliable narrator at its centre (breakout star Rami Malek) that’s not afraid to take narrative risks (breaking the fourth wall; a Fight Club-like monotonous voiceover). The season finale is this week.

You’ll never think about your PC the same way, and you’ll probably want to change all your passwords.

Great actors like Colin Farrell and Rachel McAdams breathed some life into cliched noir characters; not so great actors like Taylor Kitsch struggled with simple acting tasks such as expressing emotion, and was saddled with a storyline that would have been daring in 1985, but that in 2015 was wildly outdated.

And then there was poor Vince Vaughn in a role ill-suited to his particular talents and he was left wondering just when to pause dramatically as he continually put the wrong emPHASis on the wrong sylLABLE.

Oh, and the most depressing lounge singer in history.

A guilty pleasure. Perhaps the best sort of summer fare: wacky, stupid, forgettable, and ultimately not very good. I stuck it out because I wanted to see how well it handled its insane premise (part Twilight Zone, part Twin Peaks, part I Am Legend). A great cast chewed the scenery with gusto. Melissa Leo was the standout, but Toby Jones, Terrence Howard, Matt Dillon, Carla Gugino, Hope Davis et al had their moments. Who wants some rum raisin ice-cream?

Every shot was framed with care; the soundtrack and sound design were the stuff of dreams (or perhaps nightmares), and it had the best ensemble cast on TV.

This was a beautiful thirteen hours of lurid psychodrama, a procedural elevated to High Art. With its mixture of Dante, William Blake, Botticelli, Bach, and bacon, it was both heady and hammy, silly and sublime, pretentious and philosophical, with a gory, gorgeously shot and thoroughly satisfying final sequence (scored to a fantastic song by Siouxsie Sioux).

Fannibals are in mourning for the cancellation of their beloved show but should rejoice in the knowledge that Hannibal, Will, Bedelia, Alana, Jack (and probably the Wendigo too) have each secured their place in TV history.

This is the original Swedish version of the UK robot thriller series Humans (which I have yet to see). A fantastic blend of science-fiction, thriller, soap opera and satire that explores some genuinely interesting issues and has some brilliant world-building. There were two seasons and I binged both in a matter of days.

While I did catch up with a lot of films from earlier in the year, I only saw two summer blockbusters – Mad Max: Fury Road and Avengers: Age of Ultron. One is a gleeful, over-the-top, ridiculous, beautiful live-action version of Wacky Races (on acid); the other is a comic-book movie, and not a very good one (except for James Spader’s voice of the villain).

I won’t bore you with why Mad Max: Fury Road is by far the best film of the summer (possibly of all of 2015); you already know how great it is.

And I won’t dwell on the reasons why I was unimpressed with Avengers: Age of Ultron. In part it ‘s because I saw it after George Miller’s film, and while Miller is a fan of old school practical stunts, Joss Whedon’s superhero movie is filled with cartoonish CGI.

My Begorrathon co-host Cathy of 746 Books begins every summer with a challenge to herself and fellow bloggers: Read twenty books.

I think last year I managed three. I did a little better this time.

I have yet to see the BBC adaptation, but the book was great fun. A long (very long) exploration of magic in England at the time of the Napoleonic Wars. Filled with wonderful characters, supernatural goings-on, romance, comedy, suspense, and more footnotes than you find in many academic theses, Susanna Clarke’s novel is a joy from start to finish, told with wit, style and a great deal of wry humour (the footnote that politely points out that the English hero Wellington was in fact Irish is typical of this novel’s sly approach to History).

I found a tattered copy of Hunter S. Thompson’s 1966 chronicle of his time with California motorcycle gangs as I was trawling a charity book sale. It’s the sort of book that’s perfect for a hot summer’s day, filled as it is with the blazing heat of the sun on asphalt, the thunderous roar of hundreds of engines, the stench of sweat, grease-covered jeans, and motor-oil, and the blood-lust and drunken bravado of guys with names like Zorro, Dirty Ed, Tiny, Clean Cut, Chuck the Duck, Fat Freddy, and Charger Charley the Child Molester. Fifty years on, there’s now a certain quaintness to the raucous goings-on, but it shocked everyone when it was first published.

A Wallander mystery by Henning Mankell. There’s a brutal serial killer on the loose and there seems to be no connection between the victims. Wallander, meanwhile, is just getting to know his father when tragedy strikes. The plot is dense and gripping, but as is often the case with Swedish crime novels, some of the prose can be dry and leaden. Still, though, a great thriller.

Paul Murray’s ambitious, blackly comic chronicle of one term at a posh South Dublin Boys’ school is a brilliant, dark, twisted, funny, sad, and ultimately moving account of adolescence, and a nervy satire on the excesses and tragedies of Ireland’s elite class during the boom years of the Celtic Tiger. A triumph, probably my favourite book that I’ve read in a long time.

A great Ross Macdonald detective story about a rich old lady trying to find her long-lost son. Macdonald’s private eye, Archer, isn’t as cynical as Sam Spade nor quite as chivalrous as Philip Marlowe. This is a splendid Californian crime noir.

Speaking of California crime noir, this is one of James Ellroy’s best (and it might have, ahem, inspired Nic Pizzolatto somewhat). The setting is Los Angeles in 1950: crooked cops, sadistic gangsters, and sleazy movie types galore.

The Mystic Arts of Erasing All Signs of Death 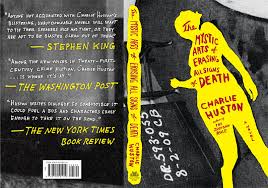 Another Los Angeles crime story, but this time the tone is sardonic. Slacker hero Webster Goodhue makes a paltry living working in the nice industry of Trauma Cleanup (the guys who show up at gruesome crime scenes to clean up the blood and brains out of carpets and furniture), and soon finds himself caught up in a very odd smuggling ring. Charlie Huston’s novel is very snarky and very funny and also rather tragic.

A Game of Thrones 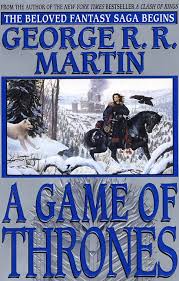 Call me Indolent. I’ve never been actually able to get through this, but I was determined this summer to give it one more try. I’m still plugging away at it and enjoying it immensely.

It’s about a whale.

10 thoughts on “A Summer of Fluff”