The Kerry landscape is looking very pretty in the trailer for Colin Farrell’s new film, the surreal, dark comedy The Lobster. 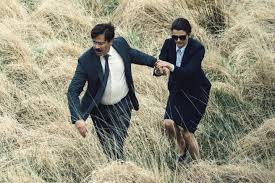 Farrell plays a chump of a divorced man who goes to a resort with other romantic losers, including Rachel Weisz, John C. Reilly, and Michael Smiley. If Farrell can’t find a partner by the end of his time there, he will be transformed into a lobster. 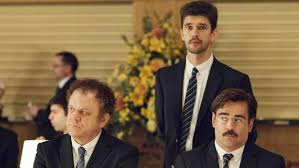 Yes, it sounds bizarre. The film was a hit at Cannes. Based on the trailer, this looks to be a refreshing slice of absurd fun, and the excellent cast seems to have embraced the inherent silliness of the concept and have wisely chosen to play it straight.

Farrell usually excels at comedy (In Bruges; Seven Psychopaths; even Horrible Bosses) and after just watching him be dour and grim in True Detective, I’m looking forward to seeing him relax a little.

A while back I picked on him because it seemed he was opting to appear in Hollywood junk instead of more interesting fare. I still haven’t seen Winter’s Tale (and I don’t want to), but he looks like he’s hit his stride this year (whatever True Detective‘s faults were, he wasn’t one of them). If The Lobster is as good as it looks, I won’t whine too much about his next movie, which sounds really stupid.

The Lobster opens in October.

8 thoughts on “The Lobster (trailer)”