Skip to content
Posted on October 17, 2015 by Niall McArdle

This is either one of the most important things I will ever write… or else it’s just somewhat interesting.

Astronomers have discovered what might be – and I stress might be – evidence of “alien megastructures” in deep space. A star near the Milky Way has a strange mess of objects orbiting it. The Kepler Space Telescope has observing the star – and thousands of others – for several years, looking for dips in light emissions, which would be indicative of passing planets casting shadows.

One star was noted as especially interesting, as it appears to have several objects in tight formation circling it, and the pattern doesn’t indicate planetary movement, but something else. “We’d never seen anything like this star,” says Yale’s Tabetha Boyajian. “It was really weird. We thought it might be bad data or movement on the spacecraft, but everything checked out.”

At that point another astronomer, Jason Wright, teamed up with “citizen scientists” and SETI enthusiasts to analyse Boyajian’s data. The conclusion?Aliens … Maybe. “When [Boyajian] showed me the data, I was fascinated by how crazy it looked,” Wright says. “Aliens should always be the very last hypothesis you consider, but this looked like something you would expect an alien civilization to build.”

Wright and the alien hunters are basing their hypothesis on the Dyson Sphere (a theoretical device that absorbs a star’s energy, first imagined by writer Olaf Stapledon, and made famous by physicist Freeman Dyson.) 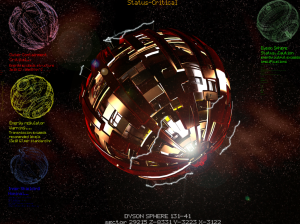 So if the strange patterns on the star are because of a network of power transformers built by an advanced extra-terrestrial civilization, well, that will be … just … wow. There will be no more snark from me, no snide, cynical jokes about Kim Kardashian’s backside, sublime stoner moments, or fashion-challenged felines.

Instead, I will gaze towards the heavens in abject wonder and share with my fellow man the blissful knowledge that we are not alone in this vast cosmic ocean.

Of course, the weird patterns might just be caused by a large cloud of space dust … in which case normal service will resume.

One thought on “We Are Not Alone … maybe”