Skip to content
Posted on January 16, 2016 by Niall McArdle

The Film: The Martian

Will it Win? If Hollywood is about the intersection of Art and Commerce, than The Martian‘s nomination for Best Picture are due more to the latter. Ridley Scott’s promotional video for NASA was well received by critics and made a bundle at the box office, and although The Martian is an extremely well-made, entertaining love letter to rocket scientists, engineers, and botanists, and easily one of the better films that Scott has made in the last few years, the Best Picture nod is probably due more to a heavy promotional campaign for a wildly popular flick than for its artistic achievements.

You can read my original review here. 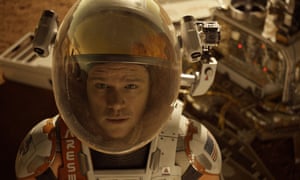 It’s telling that Scott wasn’t nominated as Best Director, and although Scott has delivered a Best Picture before (Gladiator), I will be very surprised if The Martian takes home the big prize.

Matt Damon’s nomination is a bit of a surprise, too. He’s good, very good, actually, but is he Oscars good? Not that it matters: this is Leonardo DiCaprio’s year and everyone knows it.

The film, much like its source, Andy Weir’s novel, is long on science, gallows humour, and problem-solving, and short on philosophical asides. Mark Watney is a smartarse, and his sense of humour keeps him sane and alive as much as his cleverness. But at no point in reading the novel did I get a sense of just how utterly awe-inspiring it would be to be the only human on Mars, and to know that you are probably going to die there.

Likewise, although this is a case where the movie is better than the book, I think the film misses an opportunity to aim for something deeper, although there are one or two moments when Matt Damon skirts close to his previous space film, Interstellar.

I doubt it will win Best Adapted Screenplay, but it might end up being the film’s consolation prize. By rights, though, Emma Donoghue should win for adapting her own supposedly unfilmable novel Room into one of the year’s most affecting cinematic experiences.

That leaves Production Design, Sound Editing, Sound Mixing, and Visual Effects, and in all four cases, Mad Max: Fury Road should be rewarded.