The Pitch: A Sean Penn Fever Dream about the War on Drugs (Sean Penn, thankfully, isn’t in it)

Will it Win? Cinematographer Roger Deakins is well overdue. This is his thirteenth nomination and he has never won (be thankful, Leonardo DiCaprio, that it’s only going to take you five nominations to finally win). Get ready for a lot of headlines reading “13 is Deakins’s Lucky Number” because this might just be his year, unless the Academy decides that the sentimental vote should go to John Seale (lured out of retirement to shoot Mad Max: Fury Road), or is wowed by Emmanuel Lubezki’s all-natural lighting in The Revenant.

This is the second nomination for Jóhann Jóhannsson, whose pulsating action score is a world away from last year’s The Theory of Everything.

Alan Robert Murray won the Oscar for Sound Editing last year for American Sniper, and the sound design in Sicario is fantastic. 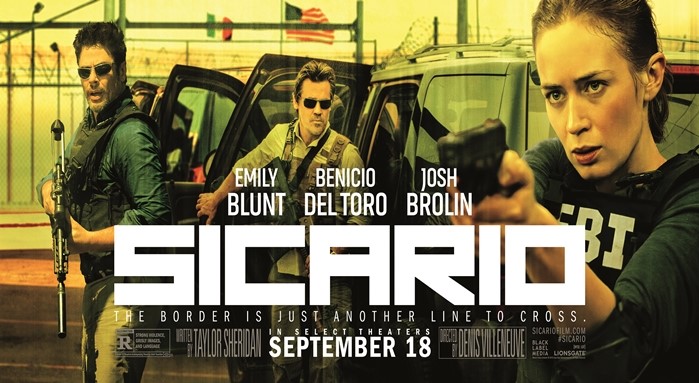 Sicario is a tense action thriller for grown-ups, and the best film about the so-called War on Drugs since Traffic. Emily Blunt, Benicio Del Toro, and Josh Brolin are all at the top of their game.

FBI Agent Kate Macer is recruited by a shadowy government official to join an inter-agency task force to apprehend a Mexican cartel leader. Guided by a consultant with a suspicious agenda and a tendency to use brutal tactics, Kate embarks on a mission that forces her to question her idealism and leaves her unsure who she can trust.

‘Sicario’ is a word used by Jewish zealots who rebelled against Roman invaders. In Mexico, the word means ‘hitman’. The word is never mentioned in the film, but another is – Medillin – and for reasons I won’t reveal, it is often spoken in a hushed tone. As one character points out, Medillin recalls a time when there was a semblance of order to the South American drug trade.

Sicario is a triumph for director Denis Villeneuve (Incendies, Enemy, Prisoners), who with each movie goes from strength to strength (he will be helming Blade Runner 2, again with Deakins as cinematographer). Taking an intelligent script from Taylor Sheridan, Villeneuve has made a taut and thought-provoking thriller that neatly wraps up the revenge drama at its core while still leaving unanswered, thorny questions about the political, legal and moral problems surrounding drug wars. 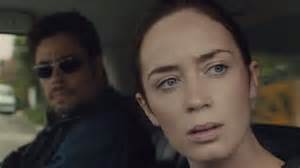 Set in the sparse desert land in and around the U.S.-Mexico border, Sicario has a pale and washed-out look: in the bleached landscape, in the uncluttered, simple decor inside meager apartments, and in the wan face of Emily Blunt. Bereft of makeup, looking tired, and usually clad in unflattering t-shirts, Blunt’s haggard appearance and frumpy demeanour is used as a character point that in a lesser film would be written as “She was an elite FBI agent, a career woman who nabbed the bad guys, but couldn’t keep a man!” She does almost have a hook-up – it doesn’t end well.

Blunt’s single-mindedness, professionalism, and dedication to doing the right thing comes up against Josh Brolin’s scuzzy, cynical CIA-man and Benicio Del Toro’s weary, bruised “consultant” on the case that puts the three of them together: the apprehension of one of the bigwigs in the Mexican cartel.

There are several standout moments in a film that includes sudden, grisly violence and queasy moments when all is supposedly calm. As with his previous films, Villeneuve knows the eerie power of a lingering shot of an otherwise trivial object. Several shots are from Blunt’s perspective, so we see an awful lot of the back of people’s heads, apt considering that her character is shut out of the mission’s real agenda. “What am I doing here?” asks an exasperated Blunt several times. “You’re asking me how a watch works,” replies Del Toro. “For now let’s just keep an eye on the time.”

A climactic scene inside a secret tunnel under the border is shot in a mixture of nightvision and infra-red. The sequence is discussed here along with other outstanding shots from 2015 movies.

Sicario is one of 2015’s best films, and why neither Blunt nor del Toro have been nominated for awards is a mystery.