The Film: The Big Short

The Pitch: A bunch of greedy crooks lie, cheat, and steal … and get away with it. Millions of people lose their jobs and their homes, and the world economy collapses. It’s a comedy.

Will it Win? Adam McKay is a major part of the reason why Will Ferrell is a movie star. McKay was a writer at Saturday Night Live and has co-written and directed most of Ferrell’s comedy hits: Anchorman, Talladega Nights, Step Brothers, and The Other Guys. McKay and Ferrell also co-founded Funny or Die, and McKay co-wrote last year’s Marvel blockbuster Ant-Man. He and Ferrell are also responsible for this famous short comedy film featuring McKay’s baby daughter.

Could the man who wrote A Public Statement from Anthony Weiner’s Penis actually win an Oscar?

Maybe. I don’t think he will win Best Director. He might take home the statue for Best Adapted Screenplay (complicated story handily broken down and explained in an entertaining, funny way). Of the eight Best Picture nominees, Spotlight is still everyone’s favourite to win, but like that film, The Big Short is another ensemble piece that tries to find uplift in a horrible story. Brad Pitt is one of the film’s producers: he makes dud choices sometimes as an actor, but his producing instincts are sharp. 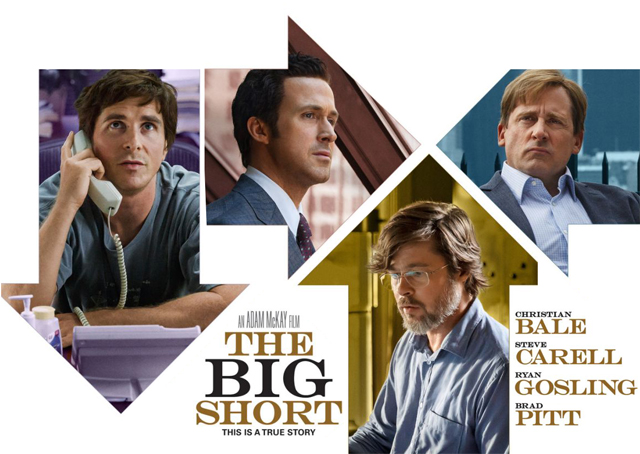 Four outsiders to Wall Street use what are sometimes perceived as eccentric insights into the U.S. financial markets to predict the meltdowns of the housing market and big banks in 2008. Betting together on the coming catastrophe, the quartet manages to invest shrewdly and amass a fortune, all while exposing the corruption of several large financial institutions.

It isn’t very often that the Academy nominates comedies for major awards, but The Big Short is the sort of comedy that the Academy likes: it’s a funny look at a desperately unfunny story (the 2008 Financial Collapse) and in spite of the fact that most of its characters are motivated by greed and are gleeful at the thought of a collapse in the housing market, it still manages to tug at a few heartstrings, something that say, The Wolf of Wall Street, another black comedy about corruption in the money markets, didn’t.

After years of directing very broad comedy, McKay sticks with a tried and true formula for staging scenes simply but effectively, and for dropping in sight gags and cutaways. He directs scenes with brio; the camera never stops moving. It covers several years but it never stops for a breath: this is a fast-paced movie. It’s easy to see why it’s up for Best Editing.

It also does a good job of explaining the machinations of sub-prime mortgages, bond-swapping, and all of the other worthless and barely legal financial products that helped bury homeowners and investors in debt.

It does this by repeatedly breaking the fourth wall and have characters address the audience directly. This is usually done by Ryan Gosling, who plays Jared Vennett, a sleazeball investor who bet against the housing market.

On other occasions the film brings in guest stars to make cameos that double as amusing mini-lectures in banking: Margot Robbie, Anthony Bourdain, Selena Gomez. The fast-moving, very funny, and sometimes heartbreaking script is adapted from Michael Lewis’s book.

At its heart, The Big Short is about how people will make themselves believe almost anything despite all evidence to the contrary, which was the essence of the housing bubble and sub-prime mortgage fiasco. The bubble was first spotted by an eccentric hedge fund manager, Michael Burry, a socially awkward former medical doctor with a glass eye and a bad haircut. He is played with relaxed (yet also reserved), goofy charm by Christian Bale. The Best Supporting Actor category this year is a tight race, but I’m pretty sure that Bale, as good as he is, won’t win. Besides, he already has an Oscar.

The film has not one but two consciences (of sorts.) One is another hedge fund manager, Mark Baum (Steve Carell in a performance that feels like he’s been studying Paul Giamatti. A lot). The other is Ben Rickert ( Brad Pitt), a former banker who gets back in the game in spite of, or maybe because of his contempt for the whole system. I knew that Gosling, Carrell, Pitt and Bale were in the film. Other faces were pleasant surprises: Melissa Leo, Marisa Tomei, Rafe Spall (very good).

Verdict: Three and a Half Bad Wigs out of Five