The Pitch: God creates the universe but people still think He’s an asshole

Will it Win? Fassbender, no; Winslet, maybe.

In a different year, Michael Fassbender’s portrayal of the obsessive, truculent perfectionist Steve Jobs would earn all sorts of plaudits. He is by turns controlling, domineering, selfish, cajoling, patronising, arrogant, and aloof, and on occasion he is all those things at once. It is a complex portrayal of a complex man – if the film ultimately fails to give an authoritative view of Jobs, the flaw is with Aaron Sorkin’s script, not Fassbender’s performance.

As it is, though, this is Leonardo DiCaprio’s year. It doesn’t matter how well Fassbender convinces us that Steve Jobs was a man ahead of time, nor how hard he works to play a man who refused to acknowledge his daughter’s paternity because in part he was troubled by his own conflicted feelings about parenthood (as a newborn Jobs was given up for adoption, and at one month old was rejected by his adoptive parents, and later as an adult he would frequent the restaurant owned by his biological father and never told the man that his favourite customer was his own son), as far as the Academy is concerned, none of that compares with being mauled by a grizzly bear.

Kate Winslet, however, stands a very good chance of winning Best Supporting Actress for her sympathetic performance of the closest thing Jobs had to a lifelong friend: his patient, loyal colleague, Joanna Hoffman. It’s a very unshowy performance from Winslet in spite of the fact that it’s a showy character who gets to make nice speeches (the script positions her as one of many of Jobs’s antagonists/conscience figures, and it’s the sort of character who only seems to exist to speak harsh truths to the film’s anti-hero).

Much of the film, actually, consists of people telling Jobs that he’s an asshole. Aaron Sorkin’s screenplay is somewhat akin to a medieval morality play, with an Everyman figure confronted with the sins and temptations of his life, personified by various characters taking turns to condemn him.

Except of course Steve Jobs was anything but an Everyman, as he would quite happily remind you. 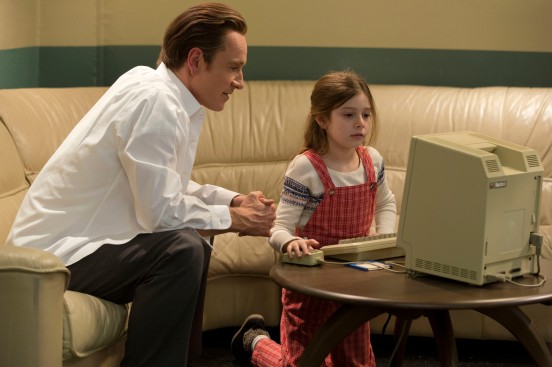 The screenplay has not been nominated for an Oscar, and with good reason. In spite of the fact that the script’s structure is rather clever, if rather contrived (it’s set mostly backstage at three different product launches: 1984, 1988, 1998, and all of the important people in Jobs’s life turn up each time), and in spite of the fact that Sorkin has taken Walter Isaacson’s massive biography and distilled it into a smart, entertaining very Sorkinese story – lots of walking and talking; lots of smart people delivering smart, rapid-fire dialogue – Jobs remains an enigma. If you’re in any way familiar with the story of Steve Jobs, there is little in the film that comes as a surprise. Those who don’t know the life-story of the man who, along with Steve Wozniak, invented the future, might be left wondering what all the fuss is about.

Which is not to say that the film is not enjoyable. Director Danny Boyle matches Sorkin’s verbiage with visual trickery, different filming styles for each of the three periods, and some frantic editing. 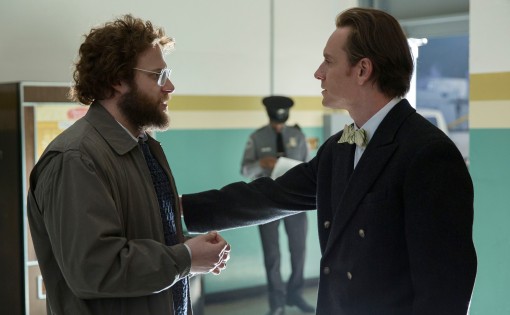 And it’s very well cast. In addition to Fassbender and Winslet, the film also features Seth Rogen as Steve Wozniak, and he’s surprisingly good as the scruffy, overweight, nerdy computer whiz, pleading with Jobs to show some humanity. “It’s not binary. You can be decent and gifted at the same time.” I think that Rogen is something of a one-trick pony as a comic, but here he shows he has the makings of a decent character actor. 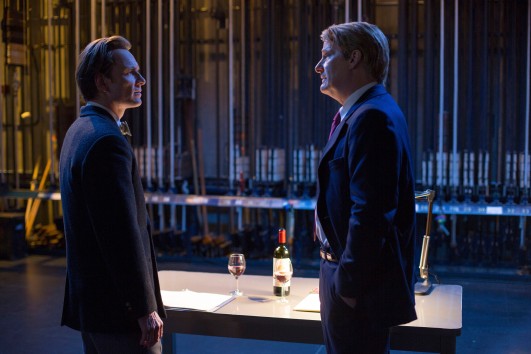 Jeff Daniels brings a sad wisdom to John Sculley, the Pepsi CEO who was lured to Apple by Jobs, and who eventually turned on him and had him turfed out of his own company. The always reliable Michael Stuhlbarg is one of Apple’s main engineers, Andy Hertzberg, who becomes a de facto father figure to Jobs’s daughter, Lisa. Katherine Waterston is Chrisiann Brennan, the woman who spent years battling Jobs to acknowledge Lisa.

Verdict: Three and a Half Black Turtlenecks out of Five