I feel like I’m the last person in the world to see Brooklyn, which I finally got around to watching.

What a lovely film. I am not sure it’s a great film, but it certainly is lovely.

Having now seen it long after the Oscars, I can understand why Saoirse Ronan was nominated. After several years as a child actor and playing the juvenile lead, Ronan has finally been given the opportunity to portray an adult. She gives a winning, heartbreaking performance as Eilis, a young woman who leaves the rain-sodden, narrow-minded, parochial confines of 1950s small-town Ireland and moves to New York.

The film, based on the novel by Colm Toibin (which I have not read, so I am not sure how the two compare) runs through almost every cliche of the immigrant story: the long farewell at the docks; the tears; the strange food; the noise and speed of New York; crowds at Coney Island.

The naive, inexperienced Eilis struggles with her fears of the New World and its strange ways (imagine – heating in every room!), and is terribly homesick; she lodges at a Boarding House in Brooklyn that is ruled by a severe yet decent landlady (Julie Walters); she is sponsored by a kindly priest (Jim Broadbent); she works as a shopgirl in a Department Store but is far too mousy (I was reminded of another 1950s clerk from last year, Rooney Mara in Carol); she attends dreary-looking dances with other Irish immigrants (everybody in her world is Irish, which of course only serves to highlight how different everything is over here from back there); and she finally meets a nice boy (Emory Cohen).

Only – the horror! He’s Italian. In spite of all this, though, the film still works. The drama seldom tilts into full-on melodrama although it comes close – I thought some of the scenes in Enniscorthy came off a little forced, and the nasty shop-owner is a sanctimonious, pinched-face bitch … but then again, it’s not that unrealistic, really. All small towns are the same, I suppose, whether it’s the 1950s or 2016: the gossip, the one-upmanship, the snobbery, the fawning over the town’s Big People (successful business owners, professionals and the like).

One of the things that the film gets absolutely right is the weather. The opening shot is of a miserable-looking street in Enniscorthy in the rain, and later in the film you can see smoke rising from a chimney – in August.

Wexford, though, is in the sunny south-east of Ireland, and I found myself smiling at a wonderful shot of characters standing on the dunes over a deserted beach on a glorious summer’s day. When I was a child, we had a caravan near Curracloe, and I think it’s the same beach they used in the film. You should go there. It’s lovely (it was also used, incidentally, for the opening of Saving Private Ryan).

There’s a very telling exchange on that beach. Eilis says she’s forgotten how nice it is.

– Don’t they have beaches in Brooklyn?

– There’ll probably be quite a few walkers along here, later.

That moment sums up Brookyln, and is, I suspect, one of the reasons why the film pleased so many audiences in the United States, where practically everyone has family stories drilled into them about their great-grandparents’ lives back home before they had to leave, whether home is Ireland, Italy, or India. Eilis is of course irrevocably altered by her life in New York, and when tragedy brings her reluctantly back home, she is far too sophisticated, too well-dressed, too worldly for the place.

There is another complication with her fellow back in Brooklyn, which I will not spoil.

The film also does a fine job of making the light in Brooklyn look golden (it was filmed mostly in Montreal). Production and costume design give the feel of the 1950s.

Most of the cast do very well. Emory Cohen has the looks and boyish charm of a movie star, and is perhaps the only cast-member who looks as if he just stepped out of the 1950s. Julie Walters lays on the Oirish accent a little too thick, as does Jim Broadbent, and if anything the representation of a benign, generous Catholic Church might almost make you forget Spotlight. Almost. 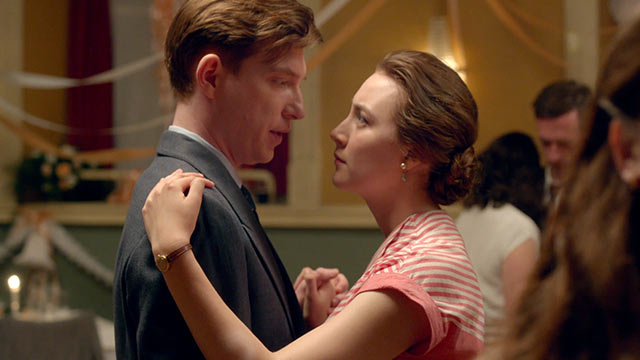 Only Domhnall Gleeson strikes the wrong note as the nice, respectable, solidly middle-class son of the Establishment. He seems a little out of place, perhaps because he’s introduced so late in the film and is not given much to do other than be a third act plot device.

As I say, though, all in all a lovely film. You could happily watch it with your granny before taking her to tea.

Verdict: Three and a Half Rashers out of Five

5 thoughts on “B is for Brooklyn”