He was presented with a crystal trophy and a cheque for 100,000 euros by the Lord Mayor at a lavish ceremony at the Mansion House in Dublin. 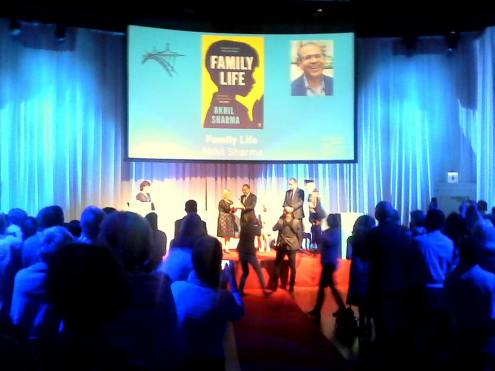 And they weren’t stingy about it.

It was my first time inside the Round Room at the Mansion House. It’s lovely, as is the main reception room where the judges and other dignitaries were gathering before the event.

I know because I unwittingly crashed that get-together, and was politely and very tactfully asked to leave.

I did manage, however, to grab a few words with some of the judges.

Ian Sansom and Carlo Gébler told me how much they had enjoyed the process of reading 160 novels (the longlist), first delivered to them last August. “Perfect time of year for reading,” quipped Sansom. Gébler has written a truly wonderful piece here about the experience.

With that many novels from all over the world, there was a wide range of styles, ideas and themes represented. “Because it’s a celebration of global literature, you’re getting every kind of novel imaginable,” Sansom said. “I think it would be very difficult to try to identify any trends … but one thing I did notice were tales of movement, of migration across borders.”

Gebler noticed “a desire to recalibrate the past, to make it the present, and there’s a nervousness about Otherness, about nonconformity, about inappropriateness, and people want to make the past now, which is a very strange thing to want to do.”

Fellow judge Meagan Delahunt told me she was thrilled to see a strong gender balance among the nominated novels (the final shortlist was split 50/50). “I think we had gender balance. I think that’s really rare, in the English-speaking world, anyway. Most of the prizes go to men. There was a lot of women in contention for that top prize. I’m very happy that we had five women in the shortlist.”

She also assured me that the novel is not dead, and is in fine health.

Family Life is an autobiographical novel about immigration and illness. Sharma’s family emigrated from India to America when he was a child, and several years later his brother was severely brain-damaged in a swimming accident.

The day before the announcement, under a strict embargo not to reveal who had won the award, I was fortunate to speak to Sharma by telephone. He is a thoughtful, soft-spoken, charming gentleman, and our interview was marked by brief silences as he pondered how best to answer questions.

He was also overwhelmed and still processing the fact that he had won.

In person on the day of the announcement, he was more relaxed, still a little giddy, and as pleasant as you could hope a writer to be (the day before, he had asked me to come up and say ‘hello’ to him at the ceremony so he could put a face to a name).

He also introduced me to the Indian ambassador. Only another 197 diplomats to go and my bucket list will be complete.

One final note: when the Lord Mayor comes into a room, she gets her own music.

It was the theme to Last of the Mohicans.