Nobody is ever going to accuse Tennessee Williams of being subtle. The playwright specialized in overwrought melodrama, writing plays that featured fragile belles, larger-than-life patriarchs, violent drunks, and repressed homosexuals, all struggling under the conformity and genteel manners of the Deep South.

It is to director Maisie Lee’s credit, therefore, that she has taken one of Williams’ one-act plays, Something Unspoken, and fashioned a quiet two-hander of desire that mixes its comedy and tragedy quite delicately to make a play that’s as refreshing as a mint julep. 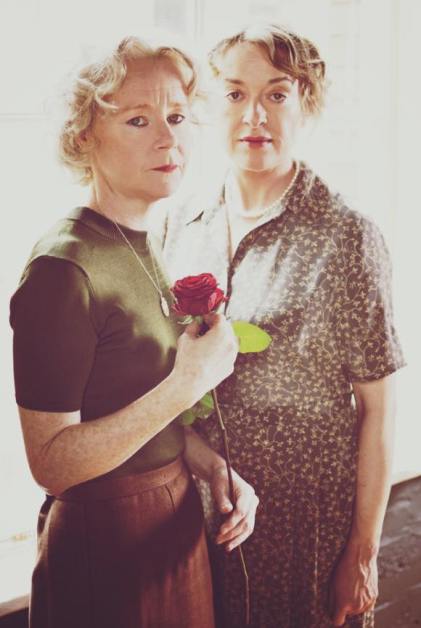 Set over a tense breakfast in the splendid Louisiana home of ageing belle Miss Cornelia Scott (Catherine Byrne), Something Unspoken is about the things said and unsaid between Cornelia and her put-upon secretary, Grace Lancaster (Noelle Brown). Cornelia spends much of the time fretting over the upcoming election at the Confederate Daughters Society, determined to be acclaimed as President. Grace screens her telephone calls, and there is a great deal of comedy in the early portion of the play, with Byrne relishing the role of a haughty snob bellowing instructions down the phone.

Grace, meanwhile, seems on the verge of a breakdown, and seeks distraction in playing music on the gramophone. The cause of her distress soon becomes apparent; it is due in part to the difference between the two women, one rich, superior, confident; the other dependent, mousey, and a bundle of nerves.

There is also something else … something unspoken. As I said, Williams is not a subtle playwright, so it won’t take you long to work out what exactly is at the core of the women’s relationship.

So much, though, is packed into less than an hour: issues of class, sexuality, wealth, and race (the two women are white, and “the help” is noticeably absent because she’s attending “a coloured funeral”).

The two actresses work well together. Brown captures the look and feel of a widow who has been forced to accept a paid position from a friend, and who has worked for Cornelia for fifteen years, usually with little gratitude. Her big moment was delivered perfectly. On the day that I saw the play, Byrne seemed to abandon her Southern accent midway through the production, opting instead to put a generic superior grandeur in her voice (it doesn’t harm the character, and it occurs to me that Byrne would make a very fine Lady Bracknell).

Andrew Murray’s simple set suggests an elegant morning room: a nicely laid breakfast table, an ornate telephone, a handsome Victrola, a large window covered by a sheer curtain (the colour of which must be a deliberate choice), and most importantly, a single red rose centered between the two women.

There are similar grace notes in Barbara McCarthy’s costumes. The two women are in peignoirs and dressing robes: Cornelia’s is all rich, vibrant greens and purples, Grace’s is a more muted pink and grey.

Lee’s direction keeps the two women separated by the breakfast table. Cornelia starts the play at Stage Right; Grace at Stage Left. By the end of the play, their positions have reversed. They touch only twice, the play’s only directing error, I think, as I believe they should not touch at all, or touch only once.

Technically, the production is perfect: it’s nice to see a play that includes the sound of music and a telephone ringing where the sound effects are timed perfectly with their cues.

Something Unspoken runs at Bewley’s Cafe Theatre until July 23rd.

One thought on “Something Unspoken”