The Expendables 3 opens with a pre-credit sequence that sets the tone for the film: noisy incomprehensible action and weak jokes. The ageing mercenaries attack a heavily-armoured prison train transporting Wesley Snipes and spring him free (his character is in jail for tax evasion, the first of many wink-wink moments in the movie). The baddies are the dimwitted sort that can’t shoot straight. Things blow up. A helicopter almost crashes. It’s meant to be an exciting sequence, but it’s edited so furiously it’s merely exhausting. And we’re only five minutes into the film. Things get worse from that point on as the film labours through a tired story that sees several of the old gang replaced by young whippersnappers, only for the geezers to come back later and help save the day. 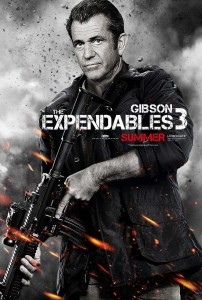 There are two bright spots in this whole mess: Mel Gibson and Antonio Banderas. When Gibson is on screen, he gives the film some much-needed energy. He’s the bad guy and he has a fun time being a sadistic, wisecracking prick. His character is an arms dealer and an art collector, which provides the film with perhaps its cleverest moment. While standing in front of a messy looking contemporary piece that’s all colours and little else, he declares it shit: it’s a painting by Sylvester Stallone. Similarly, Banderas gives a performance worthy of an Almodovar film playing a sort of mercenary Puss-in-Boots, an arrogant, energetic, eager Latin who rolls his r’s and gabbles en espanol as he desperately mugs for attention and threatens to steal the film. Not that it’s worth stealing. The film doesn’t even have the good sense to include Banderas’ “Courageous! But insane” moment from the trailer. 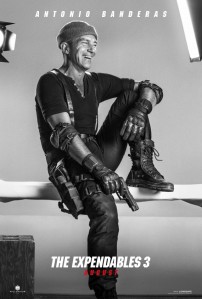 The Expendables 3 bombed at the cinema over the weekend. The studio is blaming an online leak of the film; that might be the case, or it might be the horrific word of mouth that the film deservedly received. Or it might be because in going for a PG-13 rating instead of the bloody good R these films need, it made a bloodless non-event instead of being a gleefully gory guilty pleasure (as the first two films were). Or it might just be that the thirteen year-olds that the film is aimed at saw the ads and didn’t recognise any of the wrinkled faces. In any case, there are still plans to go ahead with a fourth installment of the series. All things considered I’d rather re-watch The Wild Geese. 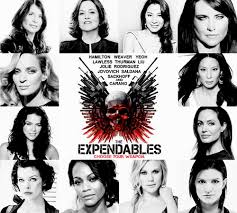 There are also rumours of an all-female version. Now that would be interesting, a nice antidote to all the machismo. As long as they have the good sense to cast the right actresses. While the action genre generally reduces women to helpless eye candy, there have been some iconic female action heroines: Sigourney Weaver, Linda Hamilton, Pam Grier, Uma Thurman, Carrie Anne Moss, and Angelina Jolie. Of course, Hollywood would have to go against its bias against giving decent roles to women over forty. If there is to be an all-female Expendables, it would have to be The Menopausals.

9 thoughts on “Are “The Expendables” Past Their Sell-By Date?”