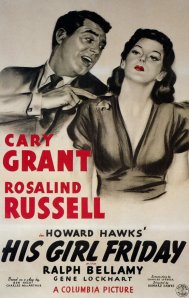 Cary Grant seemed tailor-made for the smart, sophisticated comedies that propelled him to stardom. It’s difficult to think of him without seeing him in tails and sipping a martini. His easy wit, charming manner and air of genial superiority created the Grant persona: the high-born, well-spoken cad at ease with himself and the world. It was a persona severely at odds with the reality: born Archibald Leach into poverty and emotional insecurity that would dog him for most of his life. 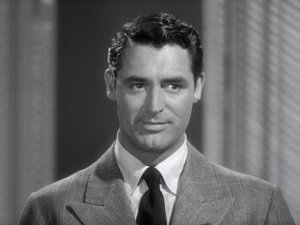 In several peerless comedies of the thirties and forties he matched wits with clever women like Constance Bennett, Irene Dunne, Katharine Hepburn and Rosalind Russell, and was casually cruel to a succession of chumps, usually poor Ralph Bellamy. He would win the girl through connivance, guile and dirty tricks, and have a grand old time doing it.

You would be forgiven for thinking that Hollywood invented the comedy of remarriage especially for Grant. In My Favorite Wife he has to win back his ex-wife Irene Dunne from dull Ralph Bellamy. He’d almost lost her to him in The Awful Truth. He wins ex-wife Rosalind Russell back from Bellamy in His Girl Friday (the film contains two marvellous in-jokes. Speaking on the phone, Grant describes his rival. “He looks like that fellow in the movies – what’s his name, Ralph Bellamy.” Later, he says, “the last man who said that to me was Archie Leach a week before he cut his throat.”) In The Philadelphia Story – a film about “the privileged class enjoying its privileges” – he wins ex-wife Katharine Hepburn from the clutches of her priggish fiance, John Howard (where was Bellamy?) but not before she has an innocent dalliance with James Stewart.

In The Philadelphia Story, nobody other than Hepburn could have played Tracy Lord, the cold, spoiled heiress with clipped Bryn Mawr tones. For much of the film it seems like she’s just playing herself, or playing with the audience’s image of her (“Oh, we’re going to talk about me, are we? Goody.” Speaking about their old yacht – “My, she was yar” – she stretches the vowel in that last word to an extreme.)

And nobody other than Grant could be C.K. Dexter Haven. The film opens with her throwing him out of the house. She breaks his golf club over her knee. Emasculated, he makes to punch her, but opts instead to push her back through the doorway. With anyone else, that would be a violent gesture, but even Grant’s physical aggression seems futile. Besides, he was always better suited to verbal sparring and playful repartee. James Stewart shows up drunk; when he hiccups, it’s Grant that says “excuse me” (an ad-lib that almost has the two actors in giggles).

The Philadelphia Story started life as a Broadway play by Philip Barry that had been tailored to suit the talents of Hepburn. At the time, she was “box-office poison” and was in exile from Hollywood, but when the play became a hit, she made sure to buy the film rights and have creative control. She chose Grant and Stewart as her co-stars. Donald Ogden Stewart wrote the script, Joseph Mankiewicz produced, and George Cukor directed. It was a huge hit. 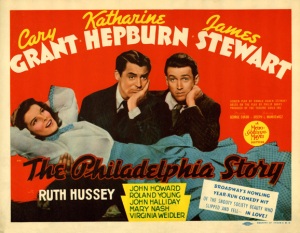 It’s easy to see why. It’s brimming with confidence; it has an easy wit and many a sharp line.

Dexter: I think you should have stuck to me longer.

Tracy: I thought it was for life, but the nice judge gave me a full pardon.

Tracy’s mischievous little sister Dinah (Virginia Weidler) welcomes guests by singing the risque “Lydia, the Tattooed Lady”, and when the grown-ups need to talk, she says, “I can tell there’s something in the air because I’m being taken away.” After much drinking and much confusion, there is a hungover morning after. Everyone is in need of “an eye-opener”; luckily Uncle Willy (Roland Young) knows “a formula said to pop pennies off the eyelids of dead Irishmen.”

The film declares its intentions with the Spanish proverb that Stewart’s character is fond of quoting: “with the rich and mighty, always a little patience.” It would be almost impossible to make a film like it today (who would want to go see a film about the 1% as witty, superior snobs who don’t get their comeuppance?), but it remains a truly charming comedy of manners.

The Philadelphia Story concerns gossipy journalists; it’s sophisticated and elegant, but its pace is positively sedated compared to His Girl Friday, Howard Hawks’ reworking of The Front Page. It moves at breakneck speed and is the film that more than any other fixed the cinematic image of journalists as venal hacks who would sell their own mother for a good story. No newsroom was ever so full of smoke and bullshit. 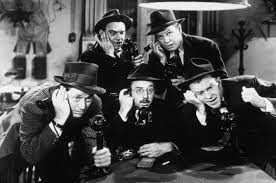 Grant is Walter Burns, the unscrupulous editor who will do anything to ensure that his ex-wife and best reporter, Hildy Johnson (gifted comedienne Rosalind Russell), will postpone her wedding to an insurance salesman, poor, foolish mother’s boy Bruce Baldwin (Ralph Bellamy) for long enough to stay and cover an execution.

As Leslie Halliwell points out, Hawks often told his actors to imagine that they were in a verbal steeplechase. Reworking the script by Charles Lederer, Hawks developed a technique of overlapping dialogue. He added unnecessary words to the beginning and end of sentences, then had the cast deliver their lines and jokes at speed. In most Hollywood scripts one page equals about one minute of screentime. The script for His Girl Friday is 190 pages; the film is 90 minutes. The result is a fast-talking, wise-cracking comedy not soon forgotten. See The Gilmore Girls and The West Wing for its influence. Richard Curtis claims that Fawlty Towers is the best farce ever written in the English language; I think His Girl Friday might just pip Cleese’s masterpiece at the post.

Like The Philadelphia Story, His Girl Friday is a film about clever, witty grown-ups, well used to sexual innuendo and sharp jibes. Speaking of Walter’s “charm”, Hildy says “he comes by it naturally. His grandfather was a snake.” Walter agrees to buy an insurance policy from Bruce in exchange for Hildy staying to write the story. “No certified cheque, no story. Get me?” “It’ll be certified. Want my fingerprints?” “No, thanks, I’ve still got those.”

In the opening scene Grant and Russell establish brilliant chemistry as they sit in his office, smoking and reminiscing about their marriage and divorce.

Hildy: Would you mind if I sat down?

Walter (patting his knee): There’s been a lamp burning in the window for you honey here.

Hildy: Oh, I jumped out that window a long time ago, Walter… Why on earth did you promise not to fight the divorce, then do everything in your power to gum up the works?

Walter: I meant to let you go, Hildy, but you know how it is, you never miss the Walter until the well runs dry.

Hildy: Hiring an aeroplane to write ‘Hildy, don’t be hasty, remember my dimple. Walter’ Delayed our divorce twenty minutes while the judge went out to look.

Walter: I don’t want to brag, but I’ve still got the dimple, and in the same place.

How could poor Ralph Bellamy compete with that? The dull insurance salesman is far too slow, naïve and decent for the big city. He doesn’t smoke or drink (Hildy does both). He gazes at her stupidly and says “even ten minutes is a long time to be away from you.” He’s probably better off in Albany, and Grant will do everything to get him there (alone, of course), including having him arrested, kidnapping his mother, and and stealing his wallet. 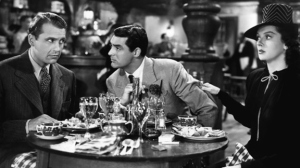 Hildy is a born reporter with the nose for a great story, and it’s inevitable that at the end she and Walter will be exchanging quips (and vows).

The Philadelphia Story was remade in colour as High Society (Grace Kelly, Bing Crosby, Frank Sinatra). His Girl Friday had another go-around as The Front Page with Walter Matthau and Jack Lemmon, and then again as Switching Channels with Burt Reynolds, Kathleen Turner and Christopher Reeve.

3 thoughts on “Comedies of Remarriage: The Philadelphia Story / His Girl Friday”