It is accepted almost without question that we are living in the Golden Age of Television, and so perhaps our expectations can be a little high. Not every series on the telly is a masterpiece, and some are stinkers, but 2014 is still shaping up to be a vintage year for drama, what with True Detective and The Honourable Woman receiving deserved praise, and Breaking Bad and Boardwalk Empire gracefully leaving the stage with their heads held high.

The Knick, which has just finished its first season on Cinemax, and has just begun on Sky Atlantic in the UK, is a fine example of what quality television drama can be, in part because it takes a historical setting and story and fashions it into stylised fiction without sacrificing its characters to the demands of plot, in part because it provides a fresh take on a familiar genre, the hospital drama, even if it still relies on some well-worn devices, and in part because it simply does not look like anything else on television right now. This is thanks to the show’s creators, Jack Amiel and Michael Begler, and to the show’s director, the hardest-working retiree in showbusiness, Steven Soderbergh. Mention should also be made of the period show’s jarring use of an electronic score by Cliff Martinez. 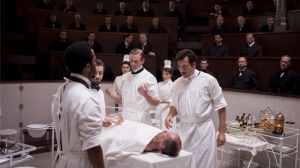 Most television drama has a familiar shooting and editing style, a formulaic mixture of short, quickly-paced scenes composed of medium and close-up shots. Soderbergh and his director of photography have opted for long takes that make extensive but unshowy use of the steadicam. One of the more remarkable aspects of the series is that while the characters are frantically trying to stop a patient from dying on the operating table, the mood very often seems almost relaxed. At other times there is a woozy, unreal quality to the framing. Characters come in and out of focus. In the stately and pristine-white operating theatre, Soderbergh uses massive close-ups of guts spilling out or blood pumped into a jar.

This strategy isn’t just directorial whim; it suits the theme of the show rather well: the shock and thrill of the modern age coming brushing up against the rigid codes of the nineteenth century. Its hero, Doctor John Thackery (Clive Owen), complains that another doctor is using outdated medicine practices” “he’s stuck in 1885.” The show has a lot of comic moments like this: a character is complaining about the upkeep cost of the X-Ray machine, and whines “who knows how long the uranium inside will last.” Downton Abbey is a prime example of a heavy-handed show that shoehorns history into the plot, with characters worrying excessively about the horseless carriage or the tuxedo; in contrast, some of The Knick‘s historical markers have a gleeful, throwaway feel. They’re there, but Soderbergh doesn’t feel the need to dwell on them, with two notable exceptions: the legal use of cocaine and the racial tension that runs through the city.

New York in 1900 may well have been a city that felt on the brink of the new, and the Knickerbocker Hospital is on the cutting edge of new technology and is bent on reforming and legitimizing surgery, taking it out of the barber shop, but in every other aspect the city is stuck in the past, and 35 years after the Civil War, there is little doubt that it is still an unequal and segregated society. The bigotry is entrenched at every level, and Doctor Algernon Edwards (Andre Holland) is mistrusted and despised by pretty much everyone. Patients recoil from his touch and refuse to let him treat them. His colleagues don`t allow him to perform surgery. He isn`t even allowed to present his own medical paper to a room filled with distinguished doctors. 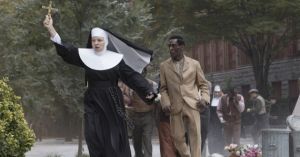 Racism is at the heart of the riots that follow the stabbing death of a white policeman by a black man. Inspired by a real-life event, the sequence has a vengeful Irish mob – aided by the Police – which almost overruns the hospital and viciously attacks black bystanders, and the hospital staff are forced to wheel their black patients across town to the Negro Infirmary. It`s a shameful moment in Irish-American history: for me, the impact of the episode was lessened somewhat by the broad stage-Irishness and woeful Oirish accents on display.

Then again, there are a fair few dodgy fake Irish accents in the series, mostly from Chris Sullivan, who plays the coarse ambulanceman Cleary, and Cara Seymour, who plays the chain-smoking nun with the abortion business on the side, Sister Harriet. Ironically, the only Irish actor in the series, Eve Hewson, plays a country girl from the South: for all I know, viewers in North Carolina cover their ears when she speaks. 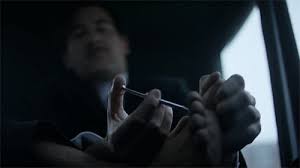 Cocaine is the source of Thackery`s boundless energy, and he has ruined his veins with it. In the opening episode we first see him waking up in an opum den, which Thackery visits almost nightly to unwind. The opening shot is of his feet, and he later shoots up between his toes on the way to work. In one episode, after attempting to go without cocaine for a bit, Thackery is a shivering, shaking mess, unable to hold the needle steady. Nurse Elkins injects him in his penis. Because of the war in the Philippines, there is a shortgae of the drug in the city. This is bad news for patients needing an anaesthetic, and worse news for Thackery.

A running storyline over several episodes concerns perhaps the most famous typhoid fever outbreak in history: the case of Typhoid Mary, and although it serves as a mini history lesson, especially how the upper class believed it was only a problem among the city`s poor and immigrant population, its real purpose is to demonstrate the resourcefulness and wiliness of Cornelia Robertson (Juliet Rylance), the daughter of the hospital’s patron, who battles her way in a man’s world, and who it is hinted is doomed to a dull married life.

The series will return for second season next year.

All photos are copyright of Cinemax