The Blacklist has just had its ‘fall finale’: eight episodes of the second season have aired, and so far I think that the NBC spy thriller/crime procedural/food-show’s sophomore season has been nowhere near as good as the first: it has less focus than the first season, and while James Spader as Reddington is as charming, eccentric and generally brilliant as ever, the rest of the show has been underwhelming, except for the appearance of a delightfully-camp Paul Reubens, and Peter Stormare’s hook and moustache, which should get their own billing. 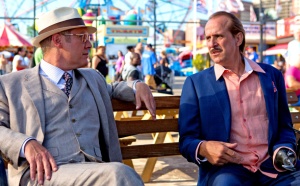 Some thoughts on the season so far – SPOILERS:

Red Probably Has A Good Tip on the 2:30 at Leopardstown

The Suit. The Waistcoat. The Hat. And especially the Tinted Glasses. Spader is still a natty dresser, but he always reminds me of a dodgy character who you might come across at a racecourse.

One of the first season’s highlights was Parminder Nagra as CIA agent Meera Malik, who might have been a mole, but who it turns out wasn’t, but who wasn’t exactly trusted by all (in Reddington’s words,”attractive but treacherous”). After inspiring a drinking game that I invented, Malik was murdered in last year’s season finale.

The second season introduces a new character in her place, the sultry-looking Samar Navabi (Mozhan Marnò). Navabi is a Mossad agent, but not just any Mossad agent: after all, this is The Blacklist, where things are never simple. She is an Iranian Mossad agent (that has to be a first).

I suspect the show wants a Mossad agent in its mix because it more easily allows for stories with an international twist – the FBI traipsing around Washington D.C. can get old – but I do miss Meera, and in hindsight killing her off now seems like lazy storytelling, because the show did not do anything much with her death … except use it as an excuse for …

Ron Ressler (Diego Klattenhoff) has been given almost nothing to do this season except look depressed and shaky.

NBC marketing went into hyperdrive when it realized it had a hit show, and because the network knows that social media is that thing all the kids are big into, it came up with a Twitter hashtag #Lizziessecret because Lizzie had something or someone hidden behind a big metal door.

The show teased the secret for several weeks before the “shocking” reveal, which could only have been shocking to people who don’t watch television shows: Tom (Ryan Eggold) was still alive, chained to the wall and looking as fashionably bearded and scruffy as a barista.

The real surprise of the show, though, is that it’s gone for cheap titillation by having Megan Boone parade around in her underwear as often as possible. I don’t remember her doing that in the first season, so this development feels like a note from the network, something that probably went: Love the show, but it needs more skin. Could you put the sexy female lead in some skimpy knickers? 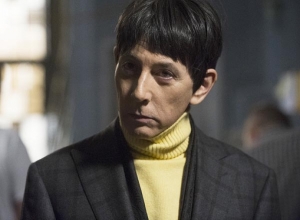 Reubens’ appearance helped salvage an otherwise uninteresting season. With a ridiculous toupee, a scowl of haughty derision that would shame Sheldon Cooper, affinity for turtlenecks, and aversion to bloodshed, Mr Vargas is a most unprepossessing heavy, and a wonderful comic sidekick for Reddington. But he could spell trouble for Red down the line if he discovers that Lizzie Keen keeps her dog cooped up all day in a motel room.

For someone who does nothing but complain about how Reddington has ruined her life and turned it upside down, she seems unduly attached to him.

The season was surprisingly light on Red’s usual Food Network-style cuisine-obsessed monologues about tasty delicacies around the world; in all, the season adopted a darker tone, and if there was an overarching theme, it was that you cannot escape your past. Red’s ex-wife; Berlin; Berlin’s daughter; Lizzie; Ressler; Dembe; Red himself, of course – all were dealing with the consequences of the past.

Red’s anecdotes were more sombre than funny: his childhood friend who had anorexia; his valuable life-lesson about loyalty that he learned as a teenager; Dembe’s history as a child soldier (Spader’s finest moment of the season) … but there was still one moment of food-related levity in the form of pączki, the Polish doughnuts (traditionally eaten on Shrove Tuesday, by the by). Here’s a recipe. 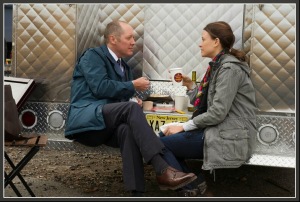 Trying to solve the mystery of The Blacklist is like trying to delete spam emails. As soon as you’re done taking care of one puzzle, another three show up. The Berlin storyline was finally ended with the mystery of who the food truck girl is and a lot of vodka, but too late to save Fitch (Alan Alda), who Berlin had targeted once he realised he had been played just as much as Red by the shadowy government group.

So we got to see a lot of blood splatter (thank goodness Mr Vargas wasn’t there!) as Fitch was blown up … just as he was about to reveal the location of vital information in St. Petersburg.

So now the show has a whole new set of mysteries to solve: What is the Fulcrum? It’s a list, or something, that Red has or had, that stopped Fitch and his cronies from killing him years ago. Maybe it’s a recipe for pączki.

The theories have already started on – where else? –  Reddit.

Expect to see a trending hashtag #whatisthefulcrum? next year when the show returns.