Caution: No spoilers in my review but there are lots of spoilers in the links, so beware.

Every so often a film comes along that grabs the culture and shakes it up a little (or a lot) and results in a lot of dinner party conversations about, you know, issues. There was a lot of silly sexist talk about how much men and women could be friends after When Harry Met Sally. Married men thinking about straying thought twice after Fatal Attraction. These days the digital age equivalent of dinner party arguments is the comments section on blogs and social media platforms. A corner of the Internet has been clogged for the last few days about marriage and the media, the two targets of David Fincher’s Gone Girl.

The film looks like a psychological thriller, but it isn’t really: it’s about what makes and breaks a modern marriage, and how the media is a ravenous beast. Some are calling it an anti-date movie; that’s a little unfair. There’s no reason it can’t be the perfect movie for date night, just as long as you are prepared for the evening to end with a serious conversation about where exactly you see this relationship going.

Although Gone Girl has the elements of a thriller and great deal of mystery, at times it doesn’t really feel very thrillerish, in part because Fincher keeps his distance – physically and emotionally – from much of the subject matter. Even the one scene that is cut like a thriller scene, with much bloodshed and quick editing, somehow feels remote. There are a couple of big twists, and another director would probably milk them for all they are worth: think closeups, fast cuts, shrieky violins. Think, in fact, of Fincher’s previous film, The Girl with the Dragon Tattoo, which most definitely looked and felt like a thriller, yet which I found less gripping and far less interesting than Gone Girl.

You surely know the plot by now: you’ve seen the real life version a thousand times on Nightline. How one day an upscale Missouri housewife, beautiful Amy Dunne suddenly disappears, and how everybody thinks her husband Nick must have killed her. Gillian Flynn’s novel takes the familiar story of how a seemingly nice guy may or may not have killed his lovely suburban wife, and turns it on its head, flashing back and forth between the events following Amy’s disappearance and her diary entries which detail how she first met, fell in love, then eventually grew frightened of her husband. This is a he said/she said tale, and you may find your sympathy moving back and forth between Nick and Amy while you try to sort out the truth.

I won’t go into detail as to how much the film differs from the novel, as to do so would mean spoilers. I read and enjoyed the novel: it’s a well-written page-turner filled with twists and turns, and is the sort of novel that critics describe as fiendishly clever. I don’t think the changes in the screen version are detrimental to the film. If anything, the movie is a little too faithful to the source material, and I think that one or two characters and scenes could have been eliminated without losing the effect, while a crucial backstory is not given the importance it needs. That said, you won’t be bored; you’ll be puzzled and curious. Each plot development in the disappearance is counterpointed by a revelation from the couple’s past, and the structure means a lot of back and forth, and while flashbacks are usually dead-weight to a film, the effect here is the opposite. Amy’s diary entries add momentum to the plot and the pace quickens. It quickens to a jog rather than a sprint, however. The film has the dark, slick look we’ve come to associate with Fincher, and the score by Trent Reznor and Atticus Ross has the same understated and eerie quality as their score for The Social Network.

Fincher has said he cast Ben Affleck in part because he noticed that the actor can sometimes have a strange, queasy smile, and Nick’s awkward smile is actually an important plot point. There’s more to Affleck, of course, than his smile. He is quite acutely cast as a handsome, charming, all-American, Midwestern college lecturer and writer. He would be your favourite teacher, the one who all the girls have a crush on, and who is well-liked by the guys because he’s down to earth and would probably be an ideal big brother; the smart jock, the bloke who can talk about literature and current affairs, but who also likes to crack open a beer and watch sports or play X-Box. But he can be a manipulator as well; there is something about his charm and boyishness that you sense he could switch on and off, and Fincher uses that ambiguity around Affleck’s personality perfectly. 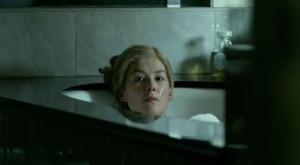 Rosamund Pike, meanwhile, has a more complex role to play. Amy is a Manhattan socialite from a moneyed background, whose childhood was plagiarized by her parents in a successful series of children’s books, who is resentful of having her life uprooted and transplanted to Missouri, and Pike does very well in ensuring that the character doesn’t just become another cliched Upper East Side bitch. I have never been a huge fan of hers; there is generally something icy and brittle about her, and the film exploits that quality, and she excels here. It’s an exquisite performance as a character who will be equally loved and hated, warm when it needs to be, smooth as silk, sharp as a knife, and I expect to see her name come up a lot during awards season.

The cast includes Neil Patrick Harris as Amy’s creepy, control-freak ex-boyfriend, and he’s quite good in an underwritten role; Kim Dickens and Patrick Fugit, very good as a pair of police detectives, Emily Ratajkowski as Nick’s besotted student, Tyler Perry as an attorney, and Carrie Coon, steadfast and funny as Nick’s twin sister, Margo, in a performance that deserves a Best Supporting Actress nomination.

And then of course there is the media brouhaha over the case, which I think is the film’s real target, and it’s wonderfully portrayed: if you don’t already despise cable news and all those brassy over-made-up blondes, then you will. There is also Amy’s definition of a cool girl and the film’s ambiguous ending. I won’t spoil it; you and your friends will probably be discussing it at length at dinner parties. Gone Girl is a slickly-made piece of serious entertainment, an arthouse version of a pulp thriller.

7 thoughts on “He Said/She Said: A Spoiler-Free Review of “Gone Girl””