T is for Tracy

It is odd, looking back at the film reviews of 20 years ago, to find that Spencer Tracy was not always the giant that he appears today. There were more giants, it’s true. To me, at any rate, that craggy face and burly build, the exploding humour, extraordinary gentleness and toughness of old leather, have always represented the ideal man – and that is real film-fan talk.

Spencer Tracy was probably the most naturally-gifted screen actor of his generation, and assuredly one of the best actors of Hollywood’s Golden Age. Laurence Olivier – no slouch in the acting department – said he learned everything he knew about acting from watching him. 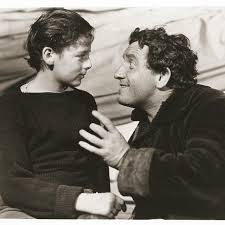 He brought his gruff brand of charm and cunning to some of the century’s most memorable films. Often a tough but fair priest, or a priestly figure (back in the day when that sort of character was common in Hollywood), he exuded authority, kindness and common decency, but he could also roguish, angry, funny, daring, or tormented. 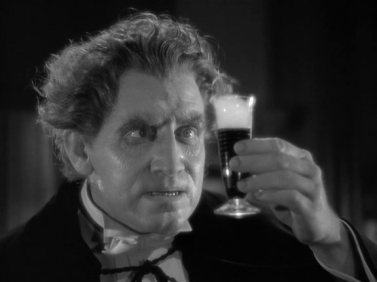 And he did it with seeming ease and without hint of artifice, as if his characters –  a fisherman or a judge or a scientist or a one-armed veteran – were just extensions of his personality.

In reality he worked very hard to hide the work: in Test Pilot, for example, there is a scene where he cracks nuts during a speech Clark Gable gives.

I remember him working out this business of nut cracking, to be performed all during Gable’s big scene, which he worked out very carefully all night long. Christ, he must have used up five pounds of nuts, and then he pretended on the set that it had just occurred to him. It was perfectly timed so he would never crack a nut on Clark’s line, but you would always have to cut to him.

While his peers idolised him for his professionalism, Tracy had little to say about the craft of acting, and ignoring all the extensive preparation he would do, he said the simple trick to acting is “know your lines and don’t bump into the furniture.” On the set of Bad Day at Black Rock, Lee Marvin asked him about his character’s motivation: “Look, I’m too old, too tired, and too goddam rich for all this bull. Let’s just get on with the scene.”

He had an infamous partnership with Katharine Hepburn – they made nine films together and had a decades-long affair (at his funeral, his widow is reputed to have said to her ‘I thought you were a rumour).

He was one of MGM’s biggest stars, but he only ended up there because the studio thought that if Clark Gable felt threatened by the newcomer’s talent, he would settle down (Gable was notorious for his demands for a raise and threatening to go on strike).

Before his time at MGM, Tracy had been around Hollywood for years, often typed as a hoodlum.

He won his first Oscar (in spite of the silly accent) for playing a Portuguese fisherman who mentors Freddie Bartholemew in Captains Courageous .

He won the Oscar again the following year for his performance as Father Flanagan in Boys’ Town; a role that could have typecast a lesser actor. But he’d had a chance to show his range: in the space of three years he had done Captains Courageous and Boys’ Town as well as romantic comedy with Myrna Loy and William Powell in Libeled Lady; looked for Livingstone in Stanley and Livingstone; looked for adventure in Northwest Passage; boxed with Gable in Boom Town; and drunk the potion in Dr Jekyll and Mister Hyde.

When Hollywood went into the propaganda business during WWII, naturally one of it biggest stars did his part. He was in A Guy Named Joe, and he made a “special appearance” in Thirty Seconds Over Tokyo as Colonel Doolittle.

But during the war he also made the first of his films with Katharine Hepburn, and the two had a lovable war of the sexes that audiences adored. 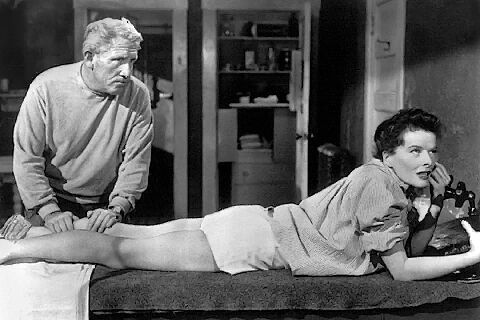 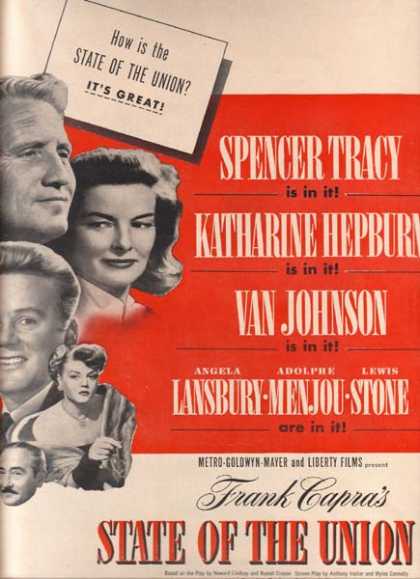 He was part of Hollywood’s Irish Mafia – a group that included James Cagney, pat O’Brien, Frank Morgan, and Frank McHugh. They would get together for “Irish night” every Thursday at one of the town’s watering holes. Sometimes they wound up at Hepburn’s house; she would stay somewhere else for the night she wouldn’t get any sleep otherwise. 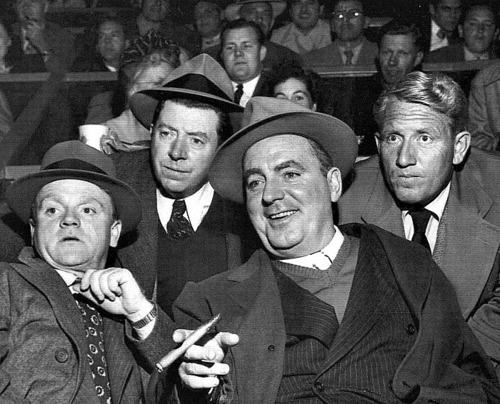 As he got older he assumed the position of Grand Old Man of Pictures, allowing him to be gruffer and more put upon than ever:

3 thoughts on “T is for Tracy”